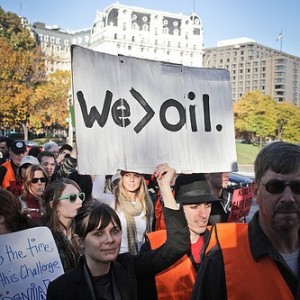 At noon today, a coalition of environmental groups, including Oil Change International and 350.org will blow the whistle of “Big Oil’s corruption” on Capitol Hill, hours before Barack Obama delivers his State of the Union address.

Activists will be gathering at the Capitol dressed in referee uniforms and then heading to our old friends at the American Petroleum Institute. They will also be targeting lawmakers who have received campaign contributions from Big Oil.

The rally is intended to keep up the pressure after last week’s announcement by the Obama Administration to reject TransCanada’s highly controversial Keystone XL pipeline.

Bill McKibben, the founder of 350.org, said “is it okay that congressmen take huge sums from companies and then vote on their interests?”

But Big Oil and its Republican stooges have not given up on Keystone just yet.

Yesterday, House and Senate Republican staff held a conference call with TransCanada lawyers to plot out how to push the Obama administration on the Keystone XL pipeline.

Among those at the meeting were staff for Rep. Lee Terry; Senator John Hoeven (R-N.D.), Energy and Commerce Committee Republicans, Senate Foreign Relations ranking member Dick Lugar, Energy and Natural Resources ranking member Lisa Murkowski and House GOP leadership. If anyone wants to know how much this lot get from Big Oil go to DirtyEnergyMoney to look.

What you also know is that the pro-Keystone backers will be increasing their lobbying efforts to try and get the pipeline through and undermine Obama.

And it comes as no surprise to find out that despite their defeat last week, the pro-pipeline lobby spent far more money lobbying for the pipeline than those against.

An analysis by ThinkProgress of lobbying disclosure records for the first, second, and third quarters of 2011 suggests that the lobbying expenses of the 20 or more business and labor interests who backed the project was $60 million compared to $1 million by the seven organizations that actively opposed the measure. TransCanada’s lobbying efforts alone over the first three quarters of 2011 totalled $920,000, just under the total amount spent by its opponents.

So we know that Big Oil will hit back on this one. We know the Republicans  are looking at ways to get around last week’s Keystone decision. And we know there will be lots of DirtyEnergy Money floating around to make sure that it happens.

In many ways the real fight for Keystone XL could just be beginning.  Prepare for the long haul.