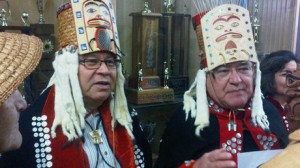 Since the beginning of the year there has been a concerted campaign by the oil industry and Canadian government to convince people that the debate over the Northern Gateway project will be hijacked by environmental groups.

Instead of trying to demonise legitimate international organisations, the Canadian government should start listening to the voices of its own people.

Yesterday the long awaited hearing into the Northern Gateway pipeline opened in British Colombia, not far from where vast supertankers could carry oil to the thirsty markets of the Far East.

There are many small First Nation communities who will be on the front-line if there is a disaster. Their traditional fishing and culture faces a “double-barrelled” threat from either a spill in the local rivers or from a tanker at sea.

It is not surprising therefore that a long line of First Nations voiced deep concerns about the pipeline, oil tankers and the risk of a catastrophic oil spill:

“I know all the history, laws, ins and outs of the native culture,” said Rod Bolton, a hereditary Haisla chief. “Please, hear me. We will not be walked over again like was done in the reserve system. We want to have a voice.”

Another Haisla Chief, Ken Hall added “The Haisla were taught to preserve and conserve everything we get. “It just terrifies me to know that we are facing more destruction.”

Another hereditary Chief, Sammy Robinson, who has run a local fishing charter business for 45 years, said  “I am worried,” adding he has visions of traditional cultural sites in the channel “covered up with oil.” Robinson indicated that they were gearing up for a legal fight. “We want to have a voice, and we’re going to have a voice …This might end up in a court battle …We’ll do whatever we need to do to stop it.”

Art Sterritt, the executive director of Coastal First Nations, which represents 10 aboriginal groups opposed to the project, said it’s the First Nations who must live with the threat of an oil spill. “We’ve got an Alberta Prime Minister trying to bully British Columbians,” he said.

Finally, Mary Nyce, who owns the Seamasters restaurant in the local Kitamaat Village, added: “If it’s pushed through, it would be the end of our history.”

Also in attendance were representatives from Enbridge, who told the community they believe the project can be built and operated safely.

But with impeccable timing, the company reported a leak from one of its pipelines in the Gulf of Mexico.