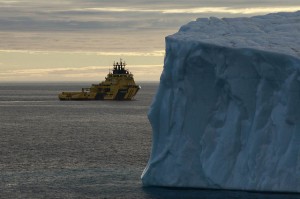 So the Arctic oil rush gathers apace. The Norwegian oil firm Statoil has made a second big oil discovery in the Barents Sea in less than a year.

Statoil confirmed that the new oil find, called Havis, might contain some 200 to 300 million barrels of recoverable oil equivalent.

If you add these to the reserves from the company’s nearby Skrugard field, which was discovered in April, the total for the two fields comes to 400 to 600 million boe.

The discovery has analysts excited. “This is extremely positive,” said John Olaisen, an analyst at Oslo-based firm Carnegie. “This is an important strategic asset in a new oil region, so this is very good … One could expect more oil finds in the region after this.”

Indeed Reuters reports that Statoil’s find could “accelerate the global scramble to find and produce Arctic energy reserves … and may prompt intensified exploration in the Russian half of the Barents and elsewhere above the Arctic Circle”.

As the Norwegians push further into the Arctic, a British parliamentary committee, the Environmental Audit Committee, has announced it will examine the issue of climate change and the opening up of the Arctic in the next couple of months.

Leading oil companies such as BP, Shell and Cairn Energy (which has just had an unsuccessful drilling campaign near Greenland) are understood to be on a draft list of companies to be called to give evidence.

Joan Walley MP, the committee’s chairman, said the inquiry would examine “whether it is even possible to drill for oil and gas safely in such remote regions”.

She said: “Rising global temperatures – caused by the burning of fossil fuels – ironically look set to clear the way for a new oil and gas gold rush in the Arctic. We will be looking at what the UK Government can do to ensure that the Arctic is protected.”

She added: “Concerns over climate change should be recognized internationally as a limiting factor on any new oil and gas drilling in the Arctic.”

Maybe someone should tell the Norwegians.