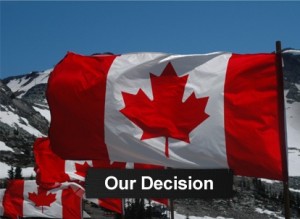 For over two years now the Canadian and Albertan governments have engaged in one of the most extensive public relations campaigns ever seen at the EU.

They have been trying to undermine European efforts to tackle climate change through the Fuel Quality Directive. They even set up a secret task force to push their pro-tar sands agenda in Europe.

So it is fine for the Canadians to pour millions of dollars into a covert lobbying campaign on foreign soil. All in the name of the dirty tar sands.

But it is not fine, it seems, if international environmental groups want to warn of the risks of the tar sands in Canada.

Last week I blogged about the new dirty tricks campaign being undertaken by the very unethical EthicalOil, that tried to argue that Canadian environmental groups where some how “fronts” for American billionaires.

Worrying it seems that their campaign to demonise environmental groups has been taken up by the Canadian government itself.

Last Friday, Prime Minister Stephen Harper warned of “the use of foreign money to really overload the public consultation phase” of the Northern Gateway pipeline review, promising his government “will be taking a close look” to ensure “our regulatory processes are effective and deliver decisions in a reasonable amount of time.”

Now, on the eve of the hearings into the proposed $6.6-billion Northern Gateway tar sands pipeline, an open letter, written by Canada’s Natural Resources Minister and published in the Globe and Mail, reiterates the same kind of alarmist warning.

The letter warns of “environmental and other radical groups” funded by “foreign special interest groups” who “threaten to hijack our regulatory system to achieve their radical ideological ends.”

The letter continues: “They attract jet-setting celebrities with some of the largest personal carbon footprints in the world to lecture Canadians not to develop our natural resources. Finally, if all other avenues have failed, they will take a quintessential American approach: sue everyone and anyone to delay the project even further.”

They system “is broken,” Mr. Oliver concludes in the letter. “It’s time to take a look at it.”

The irony of this is just unbelievable. Back in Europe, the Canadians have been lobbying to delay implementation of the Fuel Quality Directive even after peer reviewed science showed that tar sands derived fuel was more polluting.

Instead of agreeing with the science, the Canadians have tried to delay action further. They have also threatened to take the EU to the WTO, a kind of quasi-legal threat.

Canada likes meddling in other people’s affairs, it just does not like it when other people want to engage in the democratic process in Canada and warn of the dangers of the tar sands.

So when Oliver warns of people who “threaten to hijack our regulatory system to achieve their radical ideological ends,” he could quite easily be looking in the mirror.