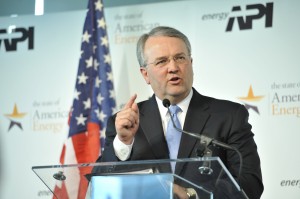 Yesterday’s presentation by American Petroleum Institute CEO Jack Gerard (right) was reported widely as the oil industry laying down the gauntlet for Obama to approve Keystone XL. The threat was indeed pretty clear. Gerard claimed President Obama would face “huge political consequences” if he denied the permit for the project.

But the API’s agenda, which is clearly endorsed by the vast majority of the North American oil and gas industry who form the API’s membership, is not just a threat to President Obama. It is a threat to the survival of planet earth and we need to stand up to its myopic, expedient agenda.

The agenda is clear. Exploit every possible oil and gas resource in North America in order to enrich the industry and its shareholders. It is presented as a boon to Americans based on three fundamentals: economic growth, job creation and energy security, this is accompanied by a barrage of impressive looking numbers that would make even Exxon blush.

But the entire plan is predicated on a scenario for energy demand growth that is not meant to be used as a basis for planning the future. It’s a trick repeated by the industry time and again to justify its relentless push into deeper and dirtier oil and gas. It often succeeds in fooling the public, and policy makers who aren’t familiar enough with energy forecasting to see through it, and the consequences of accepting it are no less than the end of life as we know it.

The trick is simple. Present reference scenario forecasts for future energy demand as the inevitable course of the future and conveniently ignore all other scenarios that consider a variety of alternative policy pathways. This enables the industry to claim that energy demand is forecast to go through the roof and that the only responsible thing to do is to meet that demand by drilling and digging up every fossil fuel resource available for the burning. As you would expect from the API, climate change is nowhere in the discussion.

That’s a major oversight because the energy scenarios, typically produced by the U.S. Department of Energy’s Energy Information Administration (EIA) or the International Energy Agency (IEA) come with a major caveat on global climate change. The caveat is that the Reference Scenario is a disaster for the climate as the resulting Greenhouse Gas emissions would turn the planet into an extremely inhospitable place.

Reference scenarios by their nature assume that policies remain frozen in time, something which clearly cannot happen if the planet is to remain hospitable. The remarkable thing about the API’s take on this is that rather than conceding that change will have to happen to prevent climate disaster, the organization advocates for regressive policies that will actually increase fossil fuel access and therefore consumption. This means that if the API gets its way, the reference scenario the EIA writes in a few years’ time will imply even greater emissions than today’s.

Let’s look at some numbers.

The API plan quotes the EIA’s International Energy Outlook (IEO) 2011 Reference Scenario in stating that, “the world will require 45 percent more energy in 2035 than it did in 2011.” If we look at the carbon dioxide emissions related to that scenario in the IEO 2011 we find that projected emissions in 2035 are 43.2 billion tons, 43% growth on the 2008 figure. There’s only one word for what that means for the planet; DISASTER.

But don’t take my word for it. Instead, let’s see what the world’s energy watchdog – the IEA – says about this. The IEA’s Reference Scenario is similar to the EIA’s. An appendix in the EIA’s report compares the two and finds only minor differences.

In the IEA’s 2009 World Energy Outlook the agency was very explicit about the climate consequences of its Reference Scenario, a scenario that then forecast CO2 emissions to rise to 40.2 billion tons by 2030, which is consistent with this year’s EIA reference forecast (the 2030 figure in the EIA model is actually 40.6).

The IEA said, “the rate of growth of fossil-energy consumption projected in the Reference Scenario takes us inexorably towards a long-term concentration of greenhouse gases in the atmosphere in excess of 1000 ppm CO2-eq. The CO2 concentration implied by the Reference Scenario would result in the global average temperature rising by up to 6°C. This would lead almost certainly to massive climatic change and irreparable damage to the planet.”

The IEA also warns of the negative security implications of the current trajectory: “Continuing on today’s energy path, without any change in government policy, would mean rapidly increasing dependence on fossil fuels, with alarming consequences for climate change and energy security.”

One of the points about reference scenarios is that they are just for reference; they are not forecasts per se.  The EIA explains that its Reference Scenario assumes no policy changes over the analyzed period (25 years) and as such, “the projections provide policy-neutral baselines that can be used to analyze international energy markets. (…)They should, however, serve as an adjunct to, not a substitute for, a complete and focused analysis of public policy initiatives.”

The IEA is more explicit in saying that its Reference Scenario should not be treated as a forecast: “The Reference Scenario is most definitely not a forecast of what will happen but a baseline picture of how global energy markets would evolve if governments make no changes to their existing policies and measures.”

So the API’s claims of prosperity and security derived from tearing down all regulatory barriers to drilling, mining and burning are predicated on “massive climatic change and irreparable damage to the planet” with “alarming consequences for climate change and energy security“. This is based not on the assumptions of utopian environmentalists but on data presented by the oil industry’s own global watchdog the IEA.

The API has launched an assault not only on the incumbent president and the stand he has taken against Big Oil by delaying the Keystone XL pipeline and proposing an end to its tax breaks, but it is also an assault on everyone’s livelihood and wellbeing. It must be resisted.