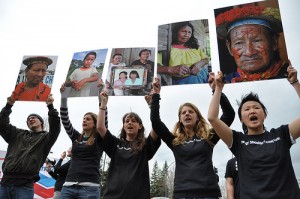 Chevron has been found guilty again.

Yesterday, an Ecuadorian appeals court upheld a ruling that the oil giant should pay US$18 billion in damages for polluting the Amazon.

It was last February that a local judge had ordered Chevron to pay US$8.6 billion in damages, but the amount was doubled to US$18 billion because Chevron failed to make a public apology.

The decision is the result of an 18-year legal battle brought by some 30,000 indigenous peoples and farmers seeking a clean-up of contaminated sites, clean drinking water and health care.

“We ratify the ruling of February 14 2011 in all its parts, including the sentence for moral reparation,” the court in the Amazonian city of Lago Agrio said in its ruling.

The plaintiffs, which had accused Texaco (acquired by Chevron in 2001) of dumping oil-drilling waste in unlined pits, polluting the forest and causing illness and deaths among indigenous people, welcomed the ruling:

“This confirms and ratifies that the company polluted and affected the Amazon,” they said in a statement. “It is necessary to clarify that no amount will be enough to repair all the crime they did in our area, nor will it be enough to bring the dead back to life.”

Ecuador’s President Rafael Correa also responded by saying that: “I think justice has been done. The harm that Chevron caused to the Amazon cannot be denied”. He called it a David versus Goliath battle.

Indigenous Rights and environmental groups Amazon Watch and Rainforest Action Network, which have spent years fighting on the side of the Ecuadorians in their effort to hold Chevron accountable, also welcomed the verdict:

“For a second time, in a jurisdiction of its own choosing, Chevron was found guilty of widespread oil contamination in Ecuador’s Amazon. It is a historic triumph for the thousands of victims who have suffered for over four decades from Chevron’s drill-and-dump practices” said the two groups in a statement.

They continued:  “Yesterday’s ruling, based in large part on Chevron’s own evidence, once again proves that the company is responsible for deliberately dumping billions of gallons of toxic waste sludge into local streams and rivers, which thousands depend on for drinking, bathing, and fishing, and created a public health crisis in the rainforest region.”

The two groups called on Chevron to stop further legal challenges and “to clean up the Ecuadorian Amazon.”

But Chevron seems in no mood to throw in the towel. Predictably the oil giant dismissed the court’s decision, calling it “illegitimate” and a “fraud”. “Today’s decision is another clear example of the politicisation and corruption of the justice system in Ecuador,” Chevron said in a statement.

The Ecuador decision comes at a time when Chevron also faces criminal charges and fines up to U.S. $11 billion in Brazil for its negligence in its operations.

If convicted, the company will be permanently banned from doing business in the South American country.