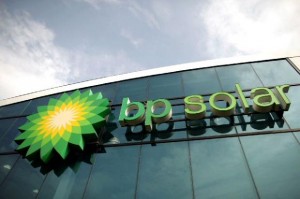 Just over a decade after BP rebranded itself “Beyond Petroleum” and introduced its famous sunburst Helios logo in honour of a Greek sun god, the oil giant has fatally undermined its “green” credentials by axing its solar power business.

BP argues that it “can’t make any money” from selling panels at a time when it continues to spend $20 billion a year on fossil fuels, some of which are in the dirty tar sands.

Once a major player in the solar market, BP has been slowly closing its panel factories. The final nail in the coffin came last week when the chief executive of BP Solar, Mike Petrucci, wrote to his remaining 100 staff last week, saying “the continuing global economic challenges have significantly impacted the solar industry, making it difficult to sustain long-term returns for the company.”

What makes BP’s move all the more surprising is that other leading companies – including BP’s competitors – are investing in solar. Earlier this week Google, for example, reported that it will invest $94 million to help build four solar power plants near Sacramento in the US.

The four plants that Google will fund will be built by San Francisco’s Recurrent Energy. “The declining cost of solar has really driven demand for us, in our business,” said Arno Harris, Recurrent’s CEO. “I would say unequivocally that there’s a ton of interest in investing in these projects.”

But even oil companies are investing in solar too. Total, Europe’s third-biggest oil company has entered the solar industry this year buying a 60 percent stake in SunPower, which makes panels.

So even the dirty tar sands companies see some kind of future in solar. But not BP. Once again this shows that for all the green rhetoric, lovely greenwashing adverts and public relations, BP is an oil and gas company. It never intended to move beyond petroleum.

Last year’s disastrous Deepwater Horizon oil spill was the perfect opportunity for the company to herald a new direction away from dirty oil.  BP blew its chance and showed its true colours. And it isn’t green.