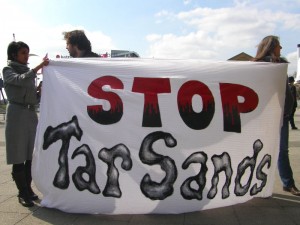 Finally the pretence is over.

For years Canada said it cared about climate change at the same time as developing one of the most dirty fuels on the planet, the tar sands.

But we knew it was a lie.

For years Canada has told European politicians that it is committed to greenhouse gas reductions in order to try and convince them that its dirty fuel should not be singled out in the Fuel Quality Directive.  But we knew that was a lie too.

And finally the Canadians could keep up the pretence no more. The day after a deal was struck in Durban to carry on the Kyoto protocol, Canada has finally pulled out.

It becomes the first country to do so.

On the surface the reason is that Canada pulled out as all the big emitters like China and the US never signed the original.

In announcing the decision, the Canadian environment minister, Peter Kent argued that “It’s now clear that Kyoto is not the path forward for a global solution to climate change. If anything, it’s an impediment.”

These words would have made sense if Durban had failed, but they had not. Because, even though the Durban deal is weak, open to vast interpretation and clearly inadequate, the big polluters had signed up to it. Now Canada’s actions could jeopardise even the Durban deal.

And the more you think about it, the more it looks like Canada was going to dump Kyoto whether there was a deal in Durban or not.

The bottom line is that Canada was forced to act for a simple reason: the carbon emissions from its dirty tar sands. The National government was urged to pull out by the Albertan government, the province which is the home of the tar sands.

It could no longer hold on to the lie with a straight face.

As the Calgary Herald puts it neatly this morning, Canada’s move reflects  “the reality of the country’s rising greenhouse gas emissions”.

There is no doubt that the Canadians are putting concerns over jobs above those on climate change. “[Withdrawing] allows us to continue to create jobs and growth in Canada,” Ken added.

So maybe now the European Parliament should ask the Canadian Ambassador to the EU to explain why repeated assurances the Canadians have given to the EU that they were committed to reducing greenhouse gas emissions were just empty promises and lies.

Predictably the reaction from environmental groups has been scathing.

Matt Horne, director of the climate change program at Pembina Institute, argues that “I can’t see it being anything but a big black eye for Canada.”

Greenpeace Canada spokesman Mike Hudema said in a written statement the Harper government “has imposed a death sentence on many of the world’s most vulnerable populations by pulling out of Kyoto.”

Hannah McKinnon of Climate Action Network Canada said formally withdrawing was a slap in the face of the international community and “a total abdication of our responsibilities”.