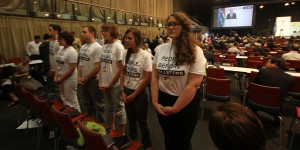 As Canada continues to push its pro-tar sands message out across North America, Europe, Asia, it was greeted by protests at the COP17 Climate talks in South Africa.

Yesterday members of the Canadian Youth Delegation were ejected from the meeting as Canada’s Environment Minister Peter Kent delivered his opening address.

Just as Kent began his speech, six youngsters stood and turned away from the Minister revealing the message “Turn your back on Canada” prominently displayed on their shirts.

“Our so-called Environment Minister entered these talks by going on record that he would be defending the tar sands. I have yet to hear him say that he’s here to defend my future,” said James Hutt, one of the youth delegates who participated in the action.

As the negotiations have progressed in Durban, Canada has won 12 ‘Fossil of the Day’ awards due to their action in Durban.

As Canada becomes an international pariah due to its stance on the tar sands, there was more good news for protesters fighting the dirty fuel.

Now that the highly controversial Keystone XL pipeline has been delayed, attention has focussed on the alternative 1,200 kilometre “Northern Gateway pipeline” that crosses British Colombia to Canada’s west coast.

On Tuesday, it was revealed that the joint review panel that is hearing submissions on the Northern Gateway will take a year longer than expected to deliver its final report.

The three-member panel has said it “would anticipate releasing the environmental assessment report in the fall of 2013 and its final decision on the project around the end of 2013.”

Annie Roy, a spokeswoman for the panel, said: “The final hearings were scheduled to start in June of 2012, meaning the panel would have probably released its report in the fall of 2012. So the schedule now is almost pushed a year.”

The panel is to begin community hearings in British Colombia in January. “The panel wants to hear from everyone,” said Roy. Thousands are expected to speak against the pipeline.

Meanwhile the protests will continue against Canada in Durban.

“By stalling international progress, the actions of this government put the future of our country and our generation in danger; we won’t take that sitting down,” says James Hutt, one of the protesters evicted from the hall. “As long as Canada is at the negotiation table promoting industry over human rights,  we will never see the climate agreement the world needs. It’s time to leave Canada behind.”