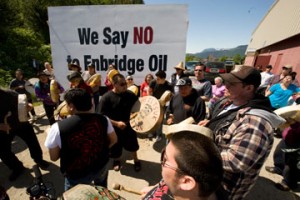 The top brass of BP and Shell will have not been amused this morning when they opened their Financial Times to see a half page advert staring at them about the ecological cost of the tar sands.

Nor will BP and Shell’s top brass want to read a new devastating report from the Natural Resources Defense Council, the Pembina Institute and the Living Oceans Society which castigates the “Northern Gateway” proposed tar sands pipeline across British Colombia.

The report argues that the social, economic, and environmental costs of a tar sands pipeline, which would cross over 785 streams and rivers through an unstable region that is prone to landslides and forest fires, would be enormous, including:

•    “Compromising the lifestyles of First Nations who depend on the region’s lands and waters for their livelihoods, culture, and health.

•    Threatening the economic well-being of the communities of British Columbia that depend on fisheries and forests.

•     Potential devastation from a major oil spill from the pipeline or an oil super tanker, which could destroy economically important salmon habitat, as well as the habitat of Spirit Bears and grizzlies, and whales, orcas, and other marine life that depend on these rich coastal waters.

•    Harm from an oil spill to the Great Bear Rainforest that the province and First Nations have worked hard to protect from unsustainable forestry practices and to shift to a conservation-based economy.”

In a conference call with reporters, the groups warned that transporting tar sands oil is far more dangerous than conventional crude. Susan Casey-Lefkowitz, director of international programmes at the Natural Resources Defence Council. “There really is no safe and risk-free way to get tar sands oil across British Columbia ecosystems in pipelines and super tankers.”

“If bitumen sinks, conventional equipment like booms and skimmers do not work,” said Katie Terhune, the energy campaigner for the Living Oceans Society. And transporting crude in super tankers was even risker than moving it through pipelines. “One mistake in navigation and we could have a catastrophe,” Terhune said.

Furthermore, given the oil industry’s damning record of pipeline safety, especially in Alaska, the report also highlights how transporting diluted bitumen poses unique risks that are worse than crude.  Because acid concentrations for diluted bitumen are 15 to 20 times higher than North American conventional crude and the viscosity is 40 to 70 times higher this means that the pipeline has to “operate at significantly higher temperature and pressures than pipelines carrying conventional oil.”

All this makes the risk of a spill more likely and when the spill occurs it will be more catastrophic.

And the final bad news for Shell is that yesterday, First Nations announced that they would sue the company for failing to protect traditional territory of the Athabasca Chipewayan First Nation peoples.

If the oil industry thought the battle over tar sands ended with the delay over Keystone XL, they were wrong.