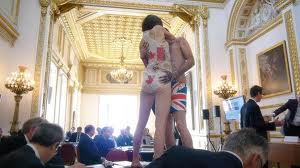 Late last week on the eve of the Durban climate talks, the British Climate Change secretary, Chris Huhne boasted that Britain was showing “leadership” in the UN negotiations.

But whilst Britain is bragging about leading the climate change fight, it is still leading the pro-tar sands charge in Europe; a somewhat hypocritical position.

This dirty lobbying is being headed by some of Britain’s most senior politicians: Prime Minister David Cameron and Foreign Secretary William Hague, amongst them.

Whilst the Durban talks remain in deadlock – there is a crucial vote this Friday in Europe as to whether to adopt the amended Fuel Quality Directive which currently gives a separate default value for the dirty tar sands from Europe.

In order to prevent this, the Canadians have engaged in one of the most vociferous public relations campaigns ever seen in the EU, which was exposed in a report I wrote for Friends of the Earth Europe called Canada’s Dirty Lobby Diary.

As a follow up to the report, I have been working with FoE and the Co-Operative to look at recently lobbying by the British on the tar sands and the Fuel Quality Directive.

We only FOIed requests for meetings since September, when David Cameron discussed the issue with his counterpart Stephen Harper during a high profile visit to Canada.

You know that officials were extremely nervous releasing the documents: In some cases paragraph after paragraph are redacted.  One document even contains nothing more than a Shell logo followed by pages of large black squares. Welcome to the British government’s new era of transparency.

What the documents do show is that British Prime Minister, David Cameron stated privately that the UK wanted “to work with Canada on finding a way forward”.

This way forward has seen Britain secretly undermining the European Commission, which believes there is enough peer-reviewed evidence to give a separate default value to the tar sands due to its higher carbon intensity compared to more conventional crudes.

Britain has been working on a “compromise position” which would not have “singled out” the tar sands data at all. British officials conceded that their “suggestion of a three-tier “grading” system wasn’t perfect, but it could avoid Canada being isolated by the EU.”

Since September there have been at least 15 high-level meetings and frequent communications between the British and the Canadians.  The Canadians have been so appreciate of this effort that Alberta’s Energy Minister, has noted that they are “very positive about the UK” and “grateful for UK efforts on the Fuel Quality Directive .“

At the same time, the British government has been lobbied by Shell and BP, which both have major tar sands projects in Alberta. BP’s vice president in Europe, Peter Mather, has been, in his own words, “bending the ear” of Norman Baker, the Minister at the Department for Transport who has responsibility for tar sands.

Baker’s Department rejected requests to release at least six extremely relevant documents on the grounds of commercial confidentiality and adverse effect on international relations, as did the Department for Business, Innovation and Skills (BIS), where Shell also met ministers.

What we do know is that Baker has been lobbying his continental counterparts ahead of Friday’s key vote, including Dutch Ministers arguing that “Our objective is an outcome that would not single out any particular crude source, including oil sands and oil shale”.

Writing in today’s Guardian Bill McKibben has highlighted the madness of Britain being Canada’s “partner in crime” on the tar sands.  “A deal to sell tar sands oil in Europe would outweigh any good the UK might do with all its other climate change measures,” he writes.

The documents are now online here.