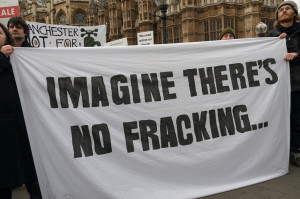 Further to my blog earlier in the week criticising the Financial Times’ new “let’s happily drill the land of plenty” philosophy to oil shale and gas, of course there is downside to these new found reserves of oil.

The big fat elephant in the room missed by the FT and ignored by the oil industry is climate change.

You can try and square the circle but soon or later you realise that one is round and the other is square and they just don’t fit.

So it is no surprise really that researchers at Tyndall Centre for Climate Change in Manchester, has found that in the absence of a stringent global emissions cap, large-scale extraction of shale gas cannot be reconciled with the latest international climate change commitments, enshrined in the Copenhagen Accord (2009).

The bottom line is that carbon dioxide from burning this new source of fossil fuel could take up over a quarter of a global emissions budget that offers a reasonable chance of avoiding 2 degrees Celcius warming.

In the UK – where the oil industry is playing catch up to the boom in the US – if just 20% of the reserves identified under the main focus of activity in Lancashire were to be extracted and burnt, this would result in emissions of over 2,000 million tonnes of carbon dioxide, representing around 15% of the Government’s greenhouse gas emissions budget through to 2050.

If you believe the industry hype, there is about 2 trillion cubic feet of natural gas in the shale rocks beneath Lancashire, with potential further reserves elsewhere.

Kevin Anderson, professor of energy and climate change at the Tyndall Centre, at the University of Manchester, said: “The government faces a difficult choice – to lead a new and low-carbon energy revolution or stick with high-carbon fossil fuels, forgo its emission targets and relinquish its hard-won international reputation on climate change.”

Paul Monaghan, head of social goals at the Cooperative which commissioned the report, added: “It is shocking how little scrutiny and thoughtful consideration has been demonstrated by the UK government and its environmental agencies when it comes to shale gas. Not least because, evidence is now emerging which indicates that gas derived from shale may have a significantly greater carbon footprint than previously thought, seriously questioning whether it can play any role in the transition to a low-carbon economy.”

I think we know the answer to that is it cannot.