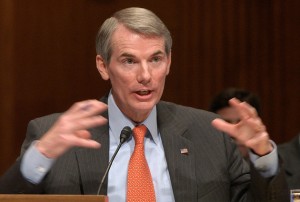 With a little over a week before the Supercommittee must make its recommendations, all eyes are turning to the Republicans on the Committee to see whether one of them will break from Republican orthodoxy and support cuts in subsidies to the fossil fuel industry.

This has been called for by other Members of Congress as well as large coalition of citizens groups.

Some have speculated that Senator Rob Portman from Ohio may be a likely candidate, given that he has so far not ruled out anything, saying “we need to keep everything on the table”. But that may be wishful thinking given his close ties to the oil and coal industries.

In 2011 Sen. Portman voted against eliminating some oil and gas industry tax loopholes and has stated that opening up the Outer Continental Shelf and Alaska to drilling would “immediately” reduce U.S. dependence on foreign oil, despite the fact that it would do nothing of the sort.

According to Payback Time, a recently released report from Oil Change International and Public Campaign, over his career Portman has also taken at least $24,000 from Koch Industries PAC, Koch executives and their spouses, including $9,600 in 2010 from each of the Koch brothers and their spouses. Koch Industries PAC has also given an additional $10,000 to his leadership PAC in 2011.

In fact Portman’s election to Senate in 2010 was due in part to the efforts of the Karl Rove-led, fossil-fuel funded American Crossroads group, which spent $820,605 to benefit his 2010 election campaign. And a number of key current and former staff also have deep fossil fuel industry ties. Robert Paduchik for example, who successfully managed Portman’s election to the Senate, was hired in February 2011 to be the vice-president of the American Coalition for Clean Coal while Jim Morrell, formerly Portman’s communications director, is now a partner at HDMK which counts the Coalition as one of its clients.

According to Payback Time, Robert Lehman, currently serving his second stint as Portman’s chief of staff, has been a lobbyist at Squire, Sanders & Dempsey where he has represented companies such as AES Corporation. Barbara Pate, his former tax counsel and legislative director when he served in the House, is a lobbyist for Davis & Harman where one of her clients is NextEra Energy.

Senator Portman also has significant personal financial holdings in dirty energy companies, including between $100,000 to $250,000 in the Vanguard Energy Fund Admiral Series, which focuses investments in the energy sector, including oil, natural gas and coal. He also holds between $50,000 and $100,000 in the AMEX Utilities Select Sector SPDR fund, which invests primarily in electric and natural gas power producers and distributors, including Exelon Corporation, Southern Company and Dominion Resources Inc.

Give these deep ties to the dirty energy industry, is it possible that Senator Portman will side with the majority of Americans of all political persuasions who want deep cuts in government handouts to the fossil fuel industry, or will he side with the 1%?

Click here to demand that Senator Portman stand with the American people and end government handouts to the fossil duel industry. If you’re in Columbus, Cincinnati,  Cleveland or Toledo, stop by one of his offices and let his staff know in person. And while you’re at it pick up the phone and call his DC office at (202)-224-3353.