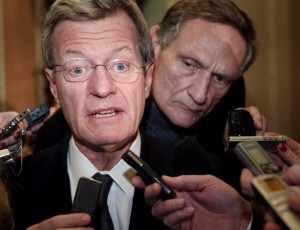 In less than two weeks the Congressional Supercommittee must submit a plan to Congress to reduce the deficit by at least $1.5 trillion. One of the big questions is whether the Supercommittee will recommend cutting billions of dollars in subsidies to the hugely profitable oil, gas and coal industries.

According to a group of 36 members of Congress, as well as a coalition of 52 national and state groups, such cuts could save the government at least $122 billion over the next ten years. We know a majority of Americans of all political persuasions want these outrageous government handouts to the fossil fuel industry to end. However, the fossil fuel industry has launched an all out lobbying blitz to ensure that they’ll be allowed to continue to feed at the public trough.

Is it the Max Baucus which has reportedly put forward a plan to the Supercommittee that includes some unspecified cuts in oil and gas subsidies and who voted in 2011 in support of some of these cuts? Is it the Max Baucus who at a May 2011 hearing with the executives of the top five oil companies asked whether “these very profitable companies actually need taxpayer subsidies?” and stated “Even without these tax breaks, these companies would clearly be highly profitable….We can put this money to better use and we should.”

Or it will be the Max Baucus that voted against oil subsidy cuts in 2010 and has historically embraced the fossil fuel industry taking huge amounts of their campaign cash?

Of the six Democrats on the Supercommittee, Baucus is by far the largest recipient of dirty energy money, having accepted at least $580,125 in campaign contributions from the sector since 1999. Some of Senator Baucus’ top dirty energy money contributors include Pennsylvania Power and Light ($32,842) Dominion Resources ($28,000) and Koch Industries ($14,500) which is owned by right-wing billionaires Charles & David Koch.

Baucus’s leadership PAC has received an additional $60,000 from Koch Industries, according to Payback Time, a recently released report from Oil Change International and Public Campaign that looks at ties between the fossil fuel industry and the Supercommittee members. According to the report, a number of former aides to Baucus now serve as fossil fuel industry lobbyists or work at firms that count dirty energy industry companies as clients.

Take David Castagnetti for example, who used to be Sen. Baucus’ chief of staff. He is a partner at Mehlman, Vogel and Castagnetti. His clients include fossil fuel industry titans like Koch Industries, the American Petroleum Institute and Edison Electric. Then there’s Nick Giordano, Baucus’ former legislative director, who is now a lobbyist at Ernst & Young where he represents ExxonMobil.  Payback Time also notes a fundraiser that Sen. Baucus held on March 11, 2011 at the offices of the lobbying firm of Williams & Jensen, whose clients in 2011 include Enbridge Pipelines and Sunoco.

Demand that the real Max Baucus stand up and support massive cuts in fossil fuel industry subsidies. If you’re in Montana visit one his offices and let his staff know in person. And while you’re at it pick up the phone and call his DC office at (202) 224-2651.

You’ll be glad you did.