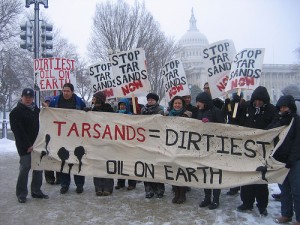 So the Europeans don’t want it. And by delaying the decision on Keystone XL for eighteen months, it looks like Obama and America doesn’t want it either.

Despite one of the most aggressive marketing and public relations campaigns ever seen by the oil industry and Canadian government to try and sell the dirty tar sands, no one wants their polluting oil.

Even the Canadians are admitting that the delay could kill Keystone. Canadian Finance Minister Jim Flaherty has said since the announcement. “The decision to delay it that long is actually quite a crucial decision. I’m not sure this project would survive that kind of delay.”

The bottom line is that in the aftermath of Obama’s decision to delay the Keystone XL project Canada’s oil industry faces an urgent search for new markets.

With Europe already signalling it wants to single out tar sands by giving it a different default value than ordinary fuel, the obvious region for the Canadian’s to court is Asia.

Yesterday the Canadian Prime Minister Stephen Harper said Canada would push ahead with its efforts to sell crude to the Asian markets.

Attending the Asian-Pacific Economic Cooperation summit in Honolulu, Harper said that: “This does underscore the necessity of Canada making sure that we are able to access Asia markets for our energy products. And that will be an important priority of our government going forward.”

Harper also said that he made that point in a meeting the day before with Chinese president Hu Jintao.

Jim Flaherty added that the Keystone decision means that “we may have to move quickly to ensure that we can export our oil to Asia through British Columbia.”

So there is going to be huge pressure on the proposed Northern Gateway pipeline route by Enbridge Inc that would transport oil to Canada’s West Coast through British Columbia.

The pressure is intense. If no other pipelines get built, Canadian production might well overwhelm the capacity to export the tar sands crude within four years, according to the oil industry consultants, IHS CERA. “If nothing else happens between now and 2015, you’ll see steeper and steeper discounts for Canadian crudes as they saturate the U.S. Midwest market,” they argue.

It’s not difficult to predict what would happen then. IHS CERA argues that the result would be stalled growth and delays to multi-billion dollar projects as producers dealt with a glut in supply and no way of accessing markets and new demand.

But let’s not think that this pipeline is a certainty either. The pipeline will now become the focal point of vigorous protests by environmentalists and first nations. Over 3,000 people have registered to make comments during upcoming proceedings.

Crucially, the pipeline is opposed by first nation groups, including the Yinka Dene Alliance, whose lands make up a quarter of the proposed route. They say that they will oppose the line under all circumstances and challenge it in court if needs be.

And if they won that legal action, the tar sands would become dead-end oil. All dressed up with nowhere to go.