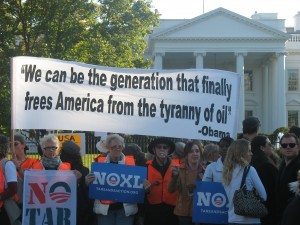 This afternoon, officials at the White House and the State Department announced that they would “examine in depth alternative routes” for the Keystone XL pipeline and that this process “could be completed as early as the first quarter of 2013”.

This amounts to an effective rejection of the pipeline.  During TransCanada’s third quarter results call in early November, CEO Russ Girling told analysts that “(s)hipping contracts have sunset clauses that could be triggered by a long delay… if the administration delays the project long enough that it becomes a low probability that they will ever get it through in a time frame that meets their needs, they are not going to support us anymore.”

Analysis by Oil Change International indicates that the contracts signed between TransCanada and its customers – producers, traders and refiners – are potentially invalidated if oil is not flowing by the end of 2013. With two years needed for construction, work would need to start in early 2012 to stand a chance of meeting these contractual agreements.  Thus, this decision is likely an “effective rejection” of the Keystone XL pipeline.

We congratulate President Obama for listening to the many not the money.  This decision shows the Administration is heeding the concerns of the 12,000 people who surrounded the White House last weekend, as well as millions of Americans and two thirds of Nebraskans by deciding to reconsider the route of the Keystone XL pipeline.  The President’s decision amounts to an effective rejection of the pipeline.

This is a great first step, but there is still much work to do to end our nation’s addiction to oil.   America needs a coherent energy policy that firmly rejects tar sands oil and definitively charts a roadmap to a climate friendly clean energy future that safeguards our health, economy and security.

America’s problem is not foreign oil – it is all oil.  As retired General Steven Anderson said today, “the greatest threat to our security is our over-reliance on oil and Americans must immediately take steps to cut our petro-addiction before it’s too late.“

Note to editors: Brig. Gen. Steven Anderson, U.S. Army (RET), served for 15 months as the senior U.S. and coalition logistician during Operation Iraqi Freedom and later as the Army’s director of operations and logistics readiness at the Pentagon.