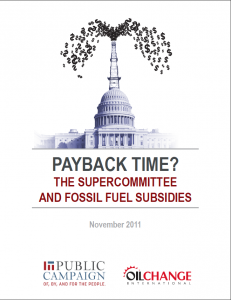 The Joint Select Committee on Deficit Reduction, also called the “supercommittee,” must vote by November 23rd on a plan that would reduce the deficit by at least $1.5 trillion. Ending taxpayer subsidies to oil, gas, and coal companies has been suggested by Democratic leaders in Congress and many organizations as something for the chopping block. Numerous polls show at least two thirds of all Americans favour ending these subsidies, including majorities of Republicans, Democrats and Independents.

Subsidy removal is strongly opposed by dirty energy interests that benefit from these handouts, and they have an army of lobbyists and millions in campaign cash behind them, according to this report from Public Campaign and Oil Change International.