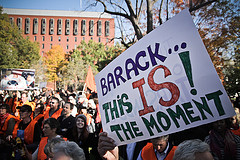 Yesterday, over 12,000 people came from across North America and Canada to the White House to call on President Obama to stop the highly controversial Keystone XL pipeline.

The thousands of protesters, some carrying a long black inflatable replica of a pipeline, formed a human chain around the White House.

Some chanted “Yes we can, stop the pipeline.”

“There’s a reason why thousands of people are at the White House today—because we need President Obama to live up to his promise to end the tyranny of oil and reject the Keystone XL tar sands pipeline”, said 350 founder Bill McKibben to the much larger than expected crowd. McKibben likened the event to subjecting Obama to symbolic house arrest.

On Saturday, the Canadian Ambassador to the US said that that if President Obama made the decision on Keystone “on merit, we’re confident,” but if it “it’s made on noise, it’s unpredictable.”

So it looks like the protesters are winning on the noise count.

The protesters should also win the argument on merit, despite the misinformation being put out by the Canadians and oil industry on how many jobs will be secured.

There is no surprise that the misinformation cheer-leader is the American Petroleum Industry that has even set up a website “jobs for the 99 %”.  The website claims “20,000 immediate private sector jobs that do not rely on any government funding” and “more than $20 billion in new spending for the U.S. economy”

Like a candy seller promising unlimited sweeties to kids, the API said back in May that “U.S. jobs supported by Canadian oil sands development could grow from 21,000 jobs today to 465,000 jobs by 2035.”

It seems that the proponents of the pipeline have pretty much plucked any number of jobs out of thin air. However many of the figures come from a report by the Perryman Group, which, you guessed it, was commissioned by the pipeline’s owner TransCanada.

The analysis in the report has been condemned as “dead wrong” by Michael A. Levi, a Senior Fellow for Energy and the Environment at the Council on Foreign Relations.

Indeed the Cornell University Global Labor Institute, in its own independent analysis found that “the company’s claim that KXL will create 20,000 direct construction and manufacturing jobs in the U.S is not substantiated.”

Cornell continued that Perryman’s analysis was “flawed” and “poorly documented. “The project will create no more than 2,500-4,650 temporary direct construction jobs for two years, according to TransCanada’s own data supplied to the State Department.”

The jobs question was also examined by the Washington Post over the weekend.

It pointed out that the Perryman study included a huge number of jobs far removed from the industry, just like the API does when it inflates its figures for the benefits of the oil industry to the US economy.

“Using that technique in a report on the impact of wind farms, Perryman counted jobs for dancers, choreographers and speech therapists”, wrote the Post.

So even on the jobs creation argument alone, Keystone falls down. The protesters have the noise. They also have the merits of the argument. The proponents just have flawed evidence.

The question remains, though, is Obama actually listening to the protesters?