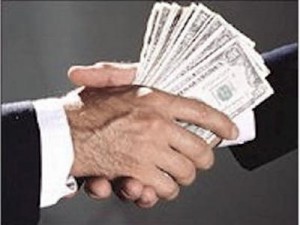 As thousands gather around the White House tomorrow to urge President Obama to reject the Keystone XL pipeline, let’s take a minute to look at some of the ways the project has garnered political support so far.

Because in the end this is a political decision. A yes indicates support for Big Oil and the dirty energy status quo and a no supports the clean energy future we so desperately need to fast track.

The first card you play is the Energy Security Card. National security’s always a good one to pull out of the hat. It lends the air of patriotic righteousness to your project that generations of military service might endow to a family. It is as if you’re just in it for the good of the nation and someone’s gotta do it.

The fallacy in that argument is no better exposed than when genuine military brass go to the trouble of publishing a report that argues that genuine energy security is only achieved through a reduction in oil demand not a continuation of business as usual. Or when one of General Petraeus’ top aides while in Iraq comes out directly against the project stating that it would “comfort our enemies”.  Given the choice, who would you trust on security, Big Oil?

So once the Energy Security Card has been played the next card is the Jobs Card. You hire some little known outfit in Texas to write up an economic analysis of your project using a proprietary model that no other economist can penetrate that makes your jobs numbers look big, and I mean Texas Big.

It’s a shame though when some economists at Cornell University, who actually know what they’re talking about, go and blow holes in your analysis the size of, well Texas.

So when it’s all going west in a handcart, your credibility is seeping away, and citizens are starting to really kick up a stink, there’s always a fall back you can use that is guaranteed to get results.

Get a bill passed in the House of Representatives. A slam dunk when you own most of them.

This is what happened in late July when a bill passed the House (279-147) directing the President to expedite approval of the Keystone XL pipeline.

According to figures we have compiled at DirtyEnergyMoney.org , representatives who voted for the bill were in receipt of NINE times more campaign money from the oil, gas and coal industries during the period of this Congress than those that voted against it.

They’d received over $5 million from companies in those sectors in the past less than two years. The average ‘Yay’ voter received 3.8 times more of this dirty energy money than the average ‘Nay’ voter.

The bill passed the House but failed to make it into the Senate.

This is exactly the kind of Washington politics that President Obama promised would be a thing of the past in his presidency. It’s now time for him to live up to that promise by rejecting the Keystone XL pipeline.