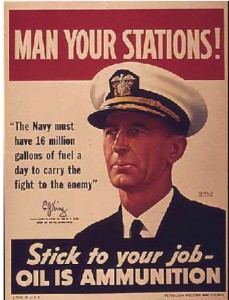 We have discussed a number of times on this blog how energy security cannot be attained through importing more oil from Canada or increasing domestic drilling. These false solutions give the impression something is being done to ease the burden of high oil prices on the nation but in reality make no difference.

So it was refreshing to see the release of a report yesterday from the heart of the security establishment that made the argument in no uncertain terms. The Center for Naval Analyses, a federally funded research and development center, released a report yesterday that clearly states that, “America’s dependence on oil constitutes a significant threat– economically, geo-politically, environmentally, and militarily”, and, that “the U.S. must take swift and aggressive action to reduce our oil use.”

In an interview with the Guardian, retired Vice Admiral Dennis McGinn pointed out that it really doesn’t matter where America’s oil comes from. “We really can’t differentiate in a realistic way between oil from Venezuela or Iran or Canada.”

It’s great to hear the security establishment making these arguments. Arguments we have made again and again in blogs, briefings, on panels and in public hearings on the Keystone XL pipeline.

The question is will President Obama, who just yesterday publically took on responsibility for the Keystone XL decision, pay heed to the wise words of the military establishment?

America cannot insulate itself from the volatile global oil market by sourcing its oil from North America. The CNA report clearly shows that genuine energy security only comes from oil demand reduction and charts a course to a 30% reduction by 2020. This reduces the impact of global oil price shocks on the American economy and will reduce the need for destructive tar sands production and other forms of extreme oil.

Perhaps the most important recommendation from the CNA report is to develop a comprehensive energy roadmap that achieves these reductions. This would provide a basis for policy that would achieve the twin goals of energy security and environmental sustainability.  This is in contrast to the ridiculous situation we have today in which government resources are sucked into deliberating over an endless oil industry wish list that has no strategic aim other than filling the overflowing coffers of Big Oil.

That roadmap begins with a rejection of the Keystone XL pipeline, a project that links Canada’s tar sands oil with the global petroleum products export market and thereby brings no energy security benefit to America.