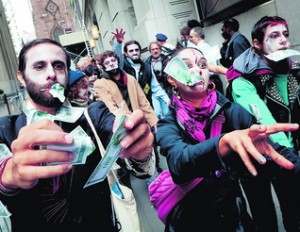 $100 Billion. That’s what the big 5 oil companies have made in profits since January 1. $102.85 billion to be more precise, according to my own calculations (see table below).

That means that they’re on course to top $140 billion for 2011. More if oil prices keep rising. And that’s in a year when unemployment has soared and unrest has spread to all corners of the world driven by economic and social inequity.

Yet as these mega profits are extracted from us in the course of our daily lives, the U.S. government continues to grant subsidies, tax relief and royalty relief to the U.S. oil industry.

The industry tells us that if we take their subsidies away then they won’t be able to afford to drill as much as they do and oil prices will go up even more. I don’t know about you but I’m feeling just a little bamboozled by that one. If there’s any sector out there right now more able to pay a little more in tax I’d like to know about it.

But are we going to see oil and gas subsidies cut in the trillion dollar budget cutting plan being hammered out by the super committee? Given how much campaign money the committee gets from the sector it’s not looking good.

Indeed as Matt Price so eloquently describes in today’s Tyee, the industry continues to defend its subsidized existence without irony in a manner reminiscent of a certain genre of B movie. Yes, the zombie cry of “Oiiiiiil” can be heard from Alberta to Texas and Ottawa to Washington as the North American oil industry digs in against the nascent clean tech era.

As Matt describes, “the ideology of oil is that because oil exists, it must be got, and it must be burned. Any critics must be deranged, damaged, discounted, discredited, and dismissed. Nothing must be allowed to stand in the way of “Oiiiiiil…”

Over at Transition Voice, where the vision of a world free of oil zombie domination is daily discussed, Erik Curren writes that Big Oil has so far gotten off lightly in the Occupy movements spreading round the globe. Perhaps surprising in the face of such lavish profits. Not that the Occupy protesters have ignored them completely but that the focus on banks has dominated for obvious reasons. Erik argues that Big Oil’s role in the corporate fleecing of the 99% is easily as pernicious as Wall Street’s.

Erik lays out 5 key ways to Occupy Big Oil. Perhaps with the implementation of these 5 principles the world may one day be safe from the zombies that threaten to change the face of the planet.

It’s still not too late to vanquish the zombie curse. Trick or treat anyone?