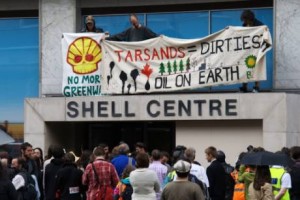 So where is this cash coming from?

Let’s not forget that Shell has spent millions over the last fifteen years trying to remould its image from a dirty oil company implicated in human rights abuses to a caring green energy company.

Shell’s latest results once again show just what an illusion that is. Part of the reason for the profit surge is an increase in production from the dirty tar sands in Canada.

Expansion of its highly controversial plant at Athabasca, in Alberta, meant Shell and its partners were able to produce 255,000 barrels a day of tar-sands oil. It is a development that will raise Shell’s CO2 contribution from the sector to more than 3.7 million tonnes a year.

The inconvenient truth for Shell is that the company’s share of tar sands production has been raised to 153,000 barrels so far – accounting for around 5% of total corporate output.

As the money pours in from the dirty tar sands and other projects, Shell, which is Europe’s largest oil and gas group by market capitalisation, admitted it was sitting on a cash pile of over $20 billion.

Despite being awash with cash, Shell has issued a thinly-veiled threat to the European Commission, warning it is likely to keep reducing its investment in the region amid long-term concerns over the continent’s competitiveness.

And here comes the interesting bit. We know that the Canadian government is using companies like Shell and BP to try and derail the Fuel Quality Directive, which would single out tar sands as a dirty fuel.

Only two weeks ago, one Canadian press article in the Globe and Mail noted that Shell was one of the European companies, along with BP and Total, to have “taken up the torch, in hopes of using their substantial influence to shift” the Commission’s policy on the tar sands.

So when Shell complains about the European Commission’s anti-competitive agenda, it looks like is doing this as part of a covert pro-tar sands campaign.  Shell is behaving just like the Canadians – trying to bully their way into getting what they want.