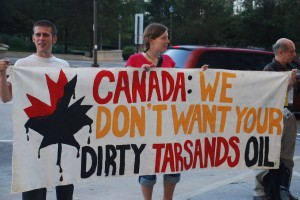 Britain was joined by some Eastern European countries yesterday in backing Canada in its dirty fight to force the EU not to discriminate against the tar sands in the Fuel Quality Directive.

A meeting of European environment experts yesterday had been expected to vote on a proposal by the European Commission to give a different default value to the tar sand, but the vote has now been postponed until December, after Britain lobbied to delay the vote.

In the nineties, Britain was labelled the dirty man of Europe by green campaigners due to its appalling environmental record.

It is beginning to act like that again. Yesterday it was joined by Estonia, which has carbon-intensive oil shale, together with other Eastern Europe states, which are also heavily reliant on fossil fuels.

Ironically the British Prime Minister David Cameron had argued that his coalition government would be greenest ever. But as a leading article in the Independent newspaper today reveals, this argument has shown to be “hollow”. Indeed the British Climate Change Secretary, Chris Huhne, will attack his own Chancellor, George Osborne, later today for threatening to abandon the Government’s green pledges.

“David Cameron’s claim to be the ‘greenest government’ lies in tatters after just 18 months,” argues the British shadow Energy and Climate Secretary, Caroline Flint. “From neutering the Green Investment Bank, to scrapping zero-carbon homes and undermining solar panels on schools, the Government’s old Tory ideas prevail at every turn. However green Chris Huhne tries to appear, we know that the true blues in Treasury undermine climate-change policies at every turn”.

And of course another way Britain is undermining the fight on climate change is backing the Canadians in their dirty fight to exploit the tar sands.

Britain is now seeking a flawed compromise that would not “single out oil sand or oil shale.” – ie that does not discriminate against all the dirty fossil fuels. Britain has also suggested a new methodology that would require “a mechanism to track crude from source to supplier.”

This is quite clearly a delaying tactic  –  as a clear, concise methodology has already been comprehensively worked out.  The science is clear but Britain and Canada are acting like the tobacco industry in trying to argue that the science is not settled.

Last week, Canada’s Natural Resources Minister,  Joe Oliver announced that he had sent a letter to the EU’s Commissioner for Energy, Günther Oettinger, in which he stated that there was no credible scientific evidence to categorizes oil sands crude as a separate ‘feedstock.’

In doing so Oliver is deliberately ignoring the overwhelming scientific evidence that suggest otherwise.

It is what would be called undiplomatically, a blatant lie.