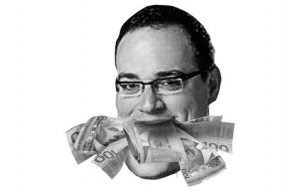 For anyone who has watched the parody film “Thank you for smoking”, they would know that being a spin doctor for a tobacco company is one of the more dubious ethical career choices.

Many people have also drawn the comparison between the ways that the tobacco industry for years denied the health impacts of cigarettes to the way the oil industry coordinated and financed a campaign to deny that climate change was caused by the burning of fossil fuels.

Most sane people know that we need to wean ourselves off tobacco and oil, but its lobbyists and spin doctors want to keep us addicted to both.

So does it come as a surprise that someone who is trying to persuade the world that Canada’s dirty tar sands is somehow ethical, used to work for big tobacco.

Somehow, although it should, it does not.

The man who invented the “ethical oil” argument is Ezra Levant, a Canadian political commentator who from June 2009 to June 2010, was a registered lobbyist for Rothmans, a subsidiary of Phillip Morris International.

According to a great profile of Levant in Mother Jones magazine, during his stint with Rothmans, “he successfully convinced regulators to crack down on cigarette smuggling instead of increasing the size of health warning labels on cigarette packages, claiming that smuggling posed the greater public health risk.”

What Levant does not tell you is that the tobacco industry deliberately smuggles its products in order to undermine tax and target kids.

Anyway, Mother Jones notes that Levant’s “lobbying paid off”. Six months after Levant concluded his work for Rothmans, Health Canada abandoned its plans to increase the size of warning labels on tobacco products”.

Eight months after concluding his work for Rothmans, Levant founded the Ethical Oil Institute, the non-profit behind EthicalOil.org.

The dirty tricks of the trade are there again.

As Mother Jones points out “although the group’s executive director has claimed that the website is ‘100 percent independent of government and industry,’ the Ethical Oil Institute shares the exact mailing address of a prominent tar sands law firm, McLennan Ross LLP. Tom Ross of McLennan Ross and Levant make up the entirety of the Ethical Oil Institute board of directors.”

Last week a colleague of mine, Ben Amunwa from the oil industry watchdog Platform, whom I have worked with on Shell’s atrocities in Nigeria, was also on the receiving end of EthicalOil’s spin.

Last Monday, it was Ben’s turn to get ‘tarred’ as EthicalOil’s spokesperson Kathryn Marshall wrote “you’ll see exactly why sensible, realistic environmentalists often find themselves on the very same page as EthicalOil.org.”

As Ben wrote last week: “The assertion could not be further from the truth.”

“First of all, the tar sands are not ethical” he wrote: “Secondly, EthicalOil.org’s biggest flaw is its illogical reasoning. Repression in Nigeria or Saudi Arabia is certainly worthy of condemnation, but it is utterly irrelevant to the question of whether or not we should be extracting tar sands, risking catastrophic climate change and devastating the environment and basic human rights of local communities in Canada.”

He added: “Thirdly, EthicalOil.org hijacks stories of human suffering from oil producing countries in order to advance its own agenda.”

The bottom line is that there can be no such as ethical oil from Canada, just as there is no such thing as a safe cigarette.

Beware the lobbyist who tries to tell you otherwise.