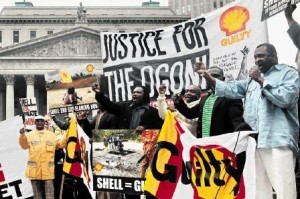 Just over two years after the Wiwa versus Shell case was settled in a New York Court room, the US Supreme Court has given approval for another ground-breaking legal case against Shell to be heard.

The lawsuit will consider whether corporations can be sued in U.S. courts for allegedly aiding human-rights abuses overseas.

Amazingly, the legal case revolves around a 222-year-old law, called the Alien Tort Statute, that has been increasingly used in recent years to sue corporations for their human rights abuses abroad.

The 1789 law allows federal district courts to hear “any civil action by an alien for a tort only, committed in violation of the law of nations or a treaty of the United States.”

The law was largely ignored until the 1980s, when federal courts started to apply it in international human rights cases.

Whereas the Wiwa versus Shell case had 9 plaintiffs, this action has more. The Ogoni in this action are also arguing that Shell was complicit in torture and other crimes against humanity.

As many regular readers of this blog with know there is overwhelming evidence that Shell was complicit in human rights abuses. For a snippet of these documents go to the Shell Guilty website.

The new lawsuit alleges that Shell was complicit in these human rights abuses including shootings, rape and torture, by paying soldiers and providing transportation between 1992 and 1995.

The road to justice so far has been long, with many setbacks. A divided panel of the 2nd U.S. Circuit Court of Appeals in New York voted 2-1 to throw out the suit, saying corporations cannot be held liable under the Alien Tort Statute. The full appeals court split 5-5 on whether to rehear the case.

The tie vote left the panel ruling in place.

Shell of course denies the allegations.

But then it obviously is ignoring the thousands of documents and pages of witness testimony that suggest otherwise..