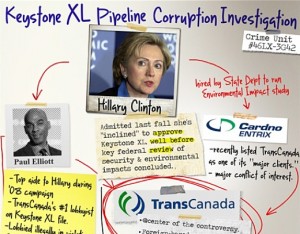 Last week I blogged about the revelation that the US State Department had actually assigned an important Environmental Impact Assessment (EIA) study of the proposed Keystone XL pipeline to a company with financial ties to the pipeline company itself, TransCanada.

The final contractor chosen – Cardno Entrix – was recommended by TransCanada despite the fact that it describes the pipeline company as a “major client” in its marketing materials.

According to the New York Times, who broke the story, this “flouts the intent of a federal law meant to ensure an impartial environmental analysis of major projects.”

Well it’s good to see that 3 Senators have taken up the conflict of interest story.

Late last week, Bernard Sanders, Patrick Leahy and Ron Wyden wrote to Hillary Clinton to express “our serious concern with recent reports that the Department of State allowed a contractor with a financial relationship with TransCanada … to conduct the Department’s environmental review mandated under the federal law pas part of its consideration of TransCanada’s proposed pipeline.”

They continued that “based on the apparent conflict of interest this presents, and the deficiencies of the final environmental impact statement (EIS) itself, we urge the Department to conduct a new and objective environmental review so the government and the public can fully and fairly evaluate the impacts associated with the proposed Keystone XL pipeline”.

The Senators added that they had “little confidence” in the assessment of the Department of State that the Keystone XL pipeline will “have ‘no significant impact on most resources’”.

They concluded that: “It is our strong opinion that the only satisfactory remedy is for the Department to conduct a new objective, and comprehensive environmental review, either directly or through a contractor with no financial ties to TransCanada.

Many people would agree with this common-sense approach.

Let’s not forget either the other conflict of interest part to the Keystone XL story.   And that revolves around Paul Elliott, who is TransCanada’s lobbyist promoting Keystone XL. Elliot just happened to work for Hilary Clinton during her 2008 campaign.
Recently released government documents reveal that TransCanada has had special access to the State Department primarily through Paul Elliott.

The embarrassing emails reveal how Elliott tried to exploit his previous political relationships in order to get the pipe-line past the regulatory hurdle.

Let’s not forget what is at stake here. When asked by Bill McKibben what would happen to the Earth’s climate if Canada exploited all the tar sands, James Hansen, the leading climatologist said simply: “It is essentially game over.”