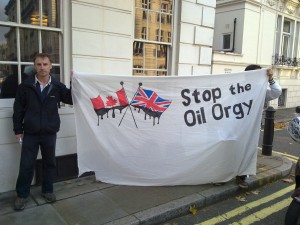 Canada’s dirty tar sands oil reserves have been turned “into a public-relations nightmare” argues the Financial Times today in its eight page pull-out on Canadian energy, forcing the industry to fight back against this “toxic perception”.

Part of this nightmare for both the industry and now President Obama is to do with the controversial Keystone XL pipeline, which has become a litmus test for the Obama Administration.

Erich Pica, president of Friends of the Earth US tells the FT: “Whether to approve this pipeline is the most important environmental decision President Obama will make before the election. If he sides with greedy oil companies instead of people and the climate, he will essentially be urging a huge part of his base to sit out the election.’’

But the FT concedes the Canadians are now fighting back in the battle for public opinion, trying to argue that tar sands are secure and a source for jobs.

The Financial Times tries to argue that pilot projects to capture CO2 might be the industry’s best weapon against their critics, but then fail to mention the crisis in CCS in other parts of the world.

Last week the flagship UK carbon capture project was said to be ‘close to collapse’, after one of the companies involved, Scottish Power was believed to be on the verge of pulling out.

Jeff Chapman, the chief executive of the Carbon Capture and Storage Association, said the collapse of the Longannet scheme would be a “severe disappointment” for the wider hopes of the sector and that includes CCS in Canada.

Meanwhile the protests against the dirty tar sands continue. 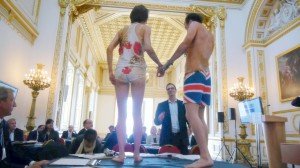 This brazen and hysterically funny one was undertaken yesterday by activists from the UK Tar Sands Network.

“We interrupted the Energy Round table today because the UK and Canadian governments flirtations are developing into friends with benefits.  This seedy relationship puts profits for the oil industry and banks ahead of much needed legislation which will curb emissions from transport fuel in Europe,” said UK Tar Sands Network campaigner Emily Coats.

Funny that, but no mention of the protest in the Financial Times. I wonder why..