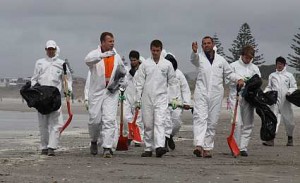 First things first – this is no Deepwater Horizon. But it is still being called a disaster and it looks like its going to get worse.

The  47,000 tonne container ship Rena is currently grounded on a reef in New Zealand’s Bay of Plenty and it is leaking heavy fuel oil after running aground last week.

We know that up to 350 tonnes of heavy oil has already escaped with a further 1,600 tonnes of fuel still aboard.

OK – this is not a burst oil well, this is not a stricken oil tanker but we still have oil leaking into  the beautiful Bay of Plenty, named by James Cook for its abundance of wildlife, including penguins, birds, dolphins, porpoises and whales.

Oil from the ship is already being washed ashore and impacting wildlife. Already a team of about 100 New Zealand military personnel has begun cleaning oil from the popular golden sand Mount Maunganui beach, but the oil is expected to push the slick at least as far south as Maketu, 20 miles down the coast.

Conservation groups are extremely worried: WWF spokesman Bob Zuur told the BBC: “There are thousands of gannets and petrels and shearwaters in the area and hundreds of blue penguins… And we’ve got dotterels and oyster catchers nesting on the sandy beaches,”. “This oil represents potentially a huge tragedy for the wildlife of the area.”

As the disaster unfolded over the weekend, the authorities faced criticism from one of New Zealand’s leading green groups, the Environmental Defence Society, for acting too slowly. Any expert in oil spills will tell you that the first few hours and days are critical – that is your window of opportunity to act decisively and bring the situation under control. But it seems the New Zealand authorities were too slow to act.

“We are very concerned to see this incident inexorably moving into a full-scale environmental disaster,” said EDS chairman Gary Taylor. “We are not convinced by what we have seen so far that Maritime New Zealand has the situation under control.”

There are fears that the disaster could escalate. “The situation over the coming days, from an environmental perspective, is going to get significantly worse,” Nick Smith has also conceded.

The whole ship now may break up in heavy seas and winds. The Rena is carrying 1,368 shipping containers, of which at least 22 are said to contain hazardous goods

The bad weather is expected to worsen over the next 24-48 hours.