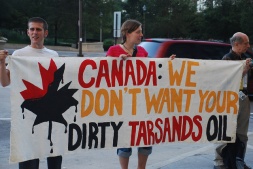 arlier this year I worked with Friends of the Earth on a report that exposed the extent of Canadian lobbying on the Fuel Quality Directive (FQD), a landmark piece of legislation by the EU which hopes to reduce CO2 emissions from transport fuels.

We detailed how there had been a huge number of lobbying events – over 110 – organised by the Canadians on tar sands and the FQD since September 2009 until now.

What the Canadians have been desperate to avoid is a higher default value for their dirty tar sands compared to normal fuels.

The report, called “Canada’s Dirty Lobby Diary”, also exposed the threats by the Canadians in their desperate attempt to get their own way.

The report ended by urging the EU not to buckle under the Canadian pressure.

Well yesterday the European Commission did just that. It proposed a higher carbon emissions value for oil from tar sands than for other sources of fuel and committed to reducing the emissions from transport fuels by 6% by 2020.

Although the decision has to be approved by EU member states, it is being seen as a huge victory for the Climate Change Commissioner Connie Hedegaard and environmental groups.

Hedegaard said: “With this measure, we are sending a clear signal to fossil fuels suppliers. As fossil fuels will be a reality in the foreseeable future, it’s important to give them the right value.”

And they have given it the right value. Yesterday the Commission proposed a greenhouse gas emission value for oil from tar sands of 107 grammes of CO2 per megajoule of energy produced, compared to a default value for conventional crude of 87.5g CO2/MJ.

The news was welcome by environmental groups – all of whom mentioned it was the right thing to do in the face of intense Canadian lobbying. Franziska Achterberg, EU transport policy adviser for Greenpeace, said: ” Despite coming under intense pressure from oil lobbyists and Canada, the commission is doing the right thing by wanting to keep tar sands out of Europe to protect the climate.”

Graham Saul, the Executive Director of Climate Action Network Canada, said the decision “sends a clear signal that no amount of aggressive lobbying can counter the scientific fact that tar sands are one of the world’s dirtiest fuels.”

Darek Urbaniak, extractive industries campaigner for Friends of the Earth Europe said: “The EU Commission has sent a clear message to Canadian and US policy makers that Europe does not want dirty fossil fuels. This is a bold step towards climate protection and is in defiance of unprecedented lobbying by the Canadian government and by the oil industry. “

Urbaniak added that “I don’t think this will be well received in Canada.”  And how right he was. Since the decision was made public yesterday, the Canadian’s have continued their cheap, dirty threats. The Natural Resources Minister Joe Oliver warned that any action against the tar sands would be “discriminatory” and could trigger a challenge before the World Trade Organization.

“Should the European Union implement unjustified measures which discriminate against the oil sands, we won’t hesitate to defend our interests,” Oliver said. “They are doing it believing, apparently, that there is no downside.”

The proposals have now been sent to EU member states who will meet in four to six weeks to vote on the proposal.

So you know that the phones will be red hot across European capitals as the Canadians continue their dirty lobbying. One country they will be hoping will back them will be Britain, which has said it did not want tar sands singled out.

But when David Cameron became Prime Minister he said he wanted his government to be the greenest ever.

Well he can’t back the tar sands and be green. Its time to decide.