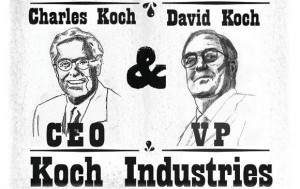 Ever since Greenpeace outed the Koch brothers as the largest financiers of climate change denial, the secretive brothers have started getting much more media attention.

The fact that they are also major backers of the controversial Tea Party movement – with its loathing of environmental protection and dismissal of climate change – has added to their notoriety as leading bette noirs of the environmental movement.

Recently, the brothers have hit back. A “Koch counter” on the company website measures the “fixation at The New York Times” and totals the newspaper’s reports about them.

But the latest hit comes not from the New York Times but Bloomberg Markets magazine, which gave 14 reporters six months to investigate the brothers and their dodgy dealings. Their 14-page explosive report was published on Sunday night.

Bloomberg found that over the last couple of years, Koch industry investigators have found evidence of improper payments to secure contracts in six countries dating back to 2002. “Those activities constitute violations of criminal law,” Koch Industries wrote back in December 2008. The company fired the person who had originally uncovered the wrong-doing;

The six month investigation uncovered “that Koch Industries — in addition to being involved in improper payments to win business in Africa, India and the Middle East — has sold millions of dollars of petrochemical equipment to Iran, a country the U.S. identifies as a sponsor of global terrorism.”

Bloomberg also reveal that “Internal company documents show that the company made those sales through foreign subsidiaries, thwarting a U.S. trade ban.”

Koch Industries took elaborate steps to ensure its U.S.-based employees weren’t involved in the sales to Iran, whilst its subsidiaries in Germany and Italy continued selling to the country until as recently as 2007.

“Every single chance they had to do business with Iran, or anyone else, they did,” one ex-employee told Bloomberg, adding “You feel totally betrayed. Everything Koch stood for was a lie.”

The Bloomberg investigation also found that Koch Industries units have also rigged prices with competitors, lied to regulators and repeatedly run afoul of environmental regulations, resulting in five criminal convictions since 1999 in the U.S. and Canada.”

In just four years from 1999 to 2003, Koch accrued more than $400 million in fines, penalties and judgments.  Former employees have even testified that they “were shown by their managers how to steal and cheat — using techniques they called the Koch Method.”

One former employee who refused to falsify benzene emission data said: “They didn’t know what to do with me,” she says. “They were really kind of baffled that I had ethics.”

At the same time as filing a report with regulators concealing that it had violated emission rules, one of the company’s refineries “was just hemorrhaging benzene into the atmosphere,” says the former employee.

“How much lawless behavior are we going to tolerate from any one company?” asks David Uhlmann, who oversaw the prosecution of the Koch refinery division  “The Koch case was a classic case of environmental crime, significant violations of law occurring alongside widespread efforts to conceal those violations, which Koch has admitted”.

Koch’s director of corporate communications said the company now had learned lessons from the past and had stopped all of its units from trading with Iran.

One thing is certain though. Koch haven’t stopped funded climate denial though.