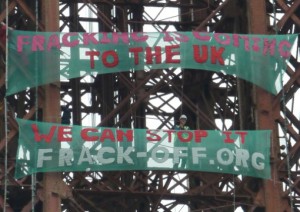 On Wednesday last week, the hype that has surrounding fracking in the US finally arrived in the UK.

The energy firm Cuadrilla, which has been drilling wells in the North West of the country under Lancashire, announced a “huge find” of gas.

Cuadrilla announced that that its tests showed there could be as much as 5.6 trillion cubic metres (200tn cubic ft) of gas in the Bowland shale under Lancashire.

Mark Miller, Cuadrilla’s chief executive, said the company had found nearly four times more gas than it was expecting to discover. “We have as much gas per square mile in Bowland as the successful North American shale plays,” he said adding that 200 trillion cubic feet would be enough to meet U.K. gas demand for 64 years.

The news was greeted with euphoria and made front page headlines across the media. A typical headline was: “Fracking brilliant: huge shale gas reserves found under UK. Lancashire is sitting on 5,660bn cubic metres of shale gas.”

But let’s look behind the hype at the holes.

Mark Miller went as far as calling fracking as being so precise it was “like keyhole surgery.”

How anyone can compare this brutal technique, which has huge unforeseen consequences, to  “keyhole surgery” is beyond me. Fracking involves injecting huge volumes of water, sand and chemicals deep underground, creating fractures which allow the gas trapped inside the shale rock to flow out. As many people know through the film Gasland it can also contaminate ground-water, and has been linked to causing small earthquakes.

Miller obviously has a short memory. Cuadrilla had to suspend its fracking operations earlier this year after two small earthquakes shook the Blackpool area.

But the backlash has already begun in the UK too.  In response to Cuadrilla’s announcement, WWF called for a moratorium on shale-gas production in the U.K. “The government should at the very least halt shale gas exploration in Britain until more research can be undertaken on both the climate-change impacts and contamination risks associated with shale gas,” said Jenny Banks, WWF-UK’s energy- and climate-change policy officer.

One expert, Robert Howarth, Professor of Ecology and Environmental Biology at Cornell University, has also called for a moratorium on drilling: “The best evidence indicates widespread contamination of drinking water wells within 1km of gas wells. A moratorium is necessary to step back and better study the risks to water quality, air quality, and global warming.”

The regulatory environment needs to be sorted out too.

It has been revealed that no government body has overall responsibility for monitoring the fracking industry and the government has no specific regulations on “unconventional” gas exploration located within hundreds of metres of settlements. Finally no environment impact survey has been conducted by the British Environment Agency or indeed by the local Lancashire County Council. You would think that the British authorities only have to look to the US to realise that standards need to be improved.

Moreover, the devil is always in the detail. Cuadrilla has so far only drilled two exploration wells. The 200 trillion cubic feet is “gas in place” and is not the same as recoverable volume of gas, which could turn out to be a much, much smaller figure.

Indeed a variety of experts have cast doubt on the amount of gas that could be recoverable.  “It seems an awfully large number to extrapolate (from so few wells),” Jeffrey Callard, Assistant Professor at Mewbourne School of Petroleum and Geological Engineering, at the University of Oklahoma, told Reuters.

Steve Holditch, Professor of Petroleum Engineering at Texas A&M University said one would need to drill dozens of wells to come up with a reasonable estimate of resources. “With that little data, then the number is fairly speculative. It’s a pie in the sky gas-in-place number,” he said.