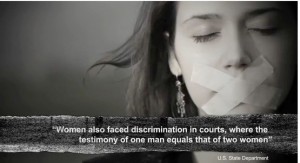 I’m continuing this week’s tar sands theme. There seems to be no limits to how many people the Canadians will annoy in their attempt to impose the dirty tar sands on the world’s oil markets. There is also no limit to their hypocrisy either.

We know the Canadians are using strong-arm tactics to threaten the EU not to discriminate against tar sands in their proposed climate change legislation called  the Fuel Quality Directive.

However at the same time that Canada is threatening to take the EU to the World Trade Organisation if it doesn’t get its way, it is now complaining that Saudi Arabia is threatening them over what the Saudis see as an offensive advert.

The Canadians have annoyed the Saudis by attacking their recond on women’s rights, at the same time as misleading the world by trying to claim that the tar sands are in someway “ethical”.

Since then the oil industry and Canada’s Conservative government ministers, including Environment Minister Peter Kent, have used the “ethical oil” argument.

To most people any type of “ethical oil” would be a complete contradiction in terms, but to try and label probably the dirtiest oil on the planet as somehow “ethical” is seriously misleading and beyond the pale.

This has not stopped the group running a television advert attacking Saudi Arabia’s record on women’s rights, under the EthicalOil banner.

The offending ad ran on the Oprah Winfrey Network in Canada, but a planned run on CTV’s Newsnet has now been panned after a legal complaint by the Saudis.

Alykhan Velshi, a former political aide, who set up the Ethicaloil.org advocacy group with Levant has told the Canadian press that lawyers from the international law firm Norton Rose LLP sent “cease and desist” letters to the national advertising watchdog, as well as to media companies, warning about potential legal action due to the adverts.

CTV has said that “As the ad in question is the subject of a legal dispute between Ethical Oil and the Kingdom of Saudi Arabia, at the advisement of our legal department we will not accept the order until the matter is resolved”.

The legal attack has been criticised by Canadian politicians, including the Immigration Minister Jason Kenney: “We don’t take kindly to foreign governments threatening directly or indirectly Canadian broadcasters or media for giving voice to freedom of speech. We think that’s inappropriate and certainly inconsistent with Canada’s belief in freedom of speech,” said Kenney.

Hey – Jason – you don’t like being threatened do you?  Well isn’t that what the Canadians are doing to the EU at the moment.

Looks pretty hypocritical to me.