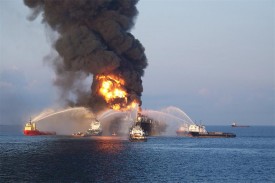 After numerous delays, and even the departure of a lead investigator, later today the US government is expected to release the report into last year’s Deepwater Horizon disaster that has been undertaken by the Coast Guard and the Agency responsible for regulating offshore drilling.

According to the Wall Street Journal, the federal investigation into the cause of the Deepwater Horizon disaster predominately points the finger at BP, but also lays some blame at its contractors, Tranocean and Halliburton.

The Journal has spoken to a person who has seen the report, and says the report does not “stray far from other earlier reports, including faulting BP for seeking to save time and cut costs without considering the ramifications.”

The report also blames Transocean, for continuing its work on the well after encountering multiple hazards and signs of trouble.  But then it goes on to argue that the main cause of the incident was a failure of the cement at the bottom of the well to stop oil and gas from flowing up. Halliburton was in charge of the cementing process.

So it looks like all three were to blame.  But were they?

The Associated Press is also reporting a new angle on who was responsible for the accident too. Apparently a BP scientist has identified a previously unreported deposit of flammable gas that could have played a role in disaster.

But true to form, BP did not divulge this information to government investigators for as long as a year.

“This is a critical factor, where the hydrocarbons are found,” Rice University engineering professor Satish Nagarajaiah tells the AP.  “I think further studies are needed to determine where this exactly was and what response was initiated by BP if they knew this fact.”

Two months ago a BP petrophysicist called Galina Skripnikova divulged in a deposition that there appeared to be a zone of gas more than 300 feet above where BP told its contractors and regulators the shallowest zone was located.

This is really important as the depth of the gas is a critical parameter because it determines how much cement a company needs to pump to adequately seal a well.

US federal regulations require the top of the cement to be at least 500 feet above the shallowest zone holding oil or gas, meaning BP’s cement job was potentially 200 feet below the limit.

So the whole job was flawed.

Halliburton has now filed a lawsuit against BP asserting that Skripnikova’s statements prove the oil giant knew about the shallower gas before the explosion and should have sought a new cement and well design.

BP, of course denies, the allegations.

Whilst the report contains about 50 recommendations for changes to offshore oil work, which will change how the offshore oil industry operates in the Gulf of Mexico, the AP argues that the finding of the gas being much higher than previously thought “raises the specter of further legal and financial troubles for BP”