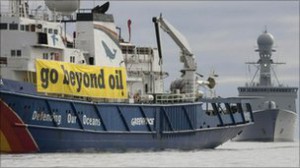 In the rush for the Arctic, Cairn Energy is currently the environmental villain of the moment.

Despite the disastrous risks of a spill and a clearly inadequate spill response plan, the company is leading the way in drilling off Greenland.

As I blogged last week, a spill in the region could be catastrophic, and Cairn clearly does not have the resources to adequately clean a large spill up.

But the prize for the oil companies is too great to ignore, despite the risks. The hype is that the Arctic region of Greenland may hold up to 20 billion barrels of oil.

However the reality is not living up to the hype and so far the drilling is not all going the company’s way.

Shares in Cairn Energy are falling sharply this morning after the company announced that it was giving up on yet another unsuccessful well.

The growing trouble for the company is that this is not the first time it has drilled dry.

It means that Cairn has been unable to find commercial quantities of oil and gas with five wells drilled in Greenland’s waters in 2010 and 2011.

Simon Thomson, Cairn chief executive, said the company “remained focused on the potential of our multi-basin position in Greenland. We have always stressed that this is a long-term campaign.”

Cairn’s failure to find commercial oil will be greeted with glee by environmentalists and especially Greenpeace, which is leading the campaign against the oil giant.

Greenpeace UK director John Sauven has come up with a novel idea for the Arctic. The organisation is exploring the legal possibilities  of protecting the seas North of Greenland from oil exploration.

“What we want do,” argues Sauven,  “is say that this area, which is currently not national territory, this area of sea ice around the North Pole, should be a ‘global commons’, collectively owned by humanity under the auspices of the United Nations.”

He continues: “The Arctic sums up the complete and utter madness, the bankruptcy of their strategy. They will go to these extreme lengths to dig up the last bit of fossil fuels because they cannot be bothered to deal with energy efficiency and find alternatives, and they’re prepared to suffer all the consequences, the impacts on wildlife and the fact that you can’t do anything about them. It’s insanity.”

John, many people agree with you.