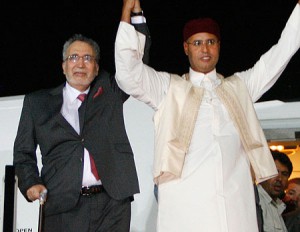 One of the greatest shocks for many over the last few days has been just how cosy the relationship was between the secret security services, CIA and M16 and the Gaddafi regime.

Just days before the Americans and British backed the rebels in bombing Gaddafi, his senior officials were saying their intervention would not happen because the two sides were “friends”.

Well now more first-hand evidence has emerged of the deals between these friends. And they give weight to the beleive that the release of the Lockerbie bomber Abdelbaset al-Megrahi was, in part, due to oil.

Libya’s former Foreign Minister, Abdulati al-Obeidi, and one of the most influential members of Gaddafi’s regime, has told the BBC said that Tripoli granted massive oil concessions to BP on the understanding that the Lockerbie bomber Abdelbaset al-Megrahi, would be allowed to return home.

In an interview broadcast last night on the BBC, al-Obeidi said that Britain had accepted Libyan indications that Abdelbaset al-Megrahi’s release was an unwritten quid pro quo of the multi-billion pound contract.

“There was a hint that releasing him would help but it was not a condition,” he said. “The Libyan side, and you know the British, they know how to take things”

Asked by the BBC if an exchange of the prisoner was part of the talks, Mr Obeidi said: “This is what I think”.

BP went on to secure one of the largest contracts to exploit Libyan oil reserves, which should be honoured by the new regime in Tripoli, due to Britain’s high profile backing of the rebels.

The news comes nearly two years to the day since the accusations first surfaced about whether oil had been part of the discussions about al-Megrahi’s release.

At the time, British Prime Minister, Gordon Brown, had said: “There was no conspiracy, no cover-up, no double dealing, no deal on oil.”

But then he would have denied any complicity between M16 and Gaddafi, something else we now know to be true.