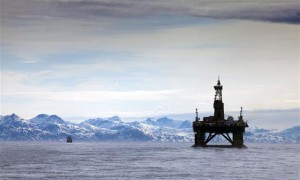 Following up last week’s news about the tie up between Exxon and Rosneft and the dangers of Arctic drilling, today’s Independent runs a disturbing warning from a distinguished polar scientist about the dangers of a spill in the region.

For a long time now, the environmental organisation Greenpeace has been shouting from the roof-tops about the dangers of drilling in the Arctic.

Greenpeace has highly active in protesting against Cairn Energy’s drilling operations in Baffin Bay, off Greenland.

The environmental group has been demanding that Cairn publish its spill response plan and even protested inside Cairn’s headquarters in Edinburgh leading to a draconian injunction being taken out by Cairn.

Steiner is a veteran of the Exxon Valdez disaster, an oil pollution specialist and basically a thorn in the side of the industry for over 20 years.  A quick summary of Greenpeace’s and Steiner’s concerns makes alarming reading:

•    Any Arctic clean-up operation would grind to a halt completely in the winter months;
•    The geography of Greenland’s coastline makes it impossible to clean up a spill;
•    Mechanically recovering the oil using booms and skimmers would not be effective in the Arctic;
•    The extremely low temperatures would make the oil more viscous, which could “cause problems for response clean up strategies when the oil is to be pumped or collected”;
•    The oil could not be burned in situ; transporting the necessary offshore equipment to deal with a blow out to the spill site would take between 51-84 hours, which means the exposed oil “is no longer amenable to ignition”;
•    “Even in the most ideal conditions, recovery rates will never be 100 per cent and are actually more likely to be around 10 to 20 per cent.” “Clean up techniques can be damaging and in some circumstances oiled shorelines are best left to recover naturally”;
•    The impact of a spill on Arctic wildlife would be devastating, including significant long-term impacts on narwhals and breeding colonies of Atlantic puffins and razorbills. Marine mammals, such as seals and walruses, may be affected through the food chain.  Despite this Cairn’s response plan does not include any details on how wildlife would be affected

In fact, what this shows is that nothing much has changed since the Exxon Valdez. Despite the industry going ever deeper into the Arctic, and the risks getting ever greater, we cannot clean up spills there.

Now Steiner and Greenpeace have been joined by Peter Wadhams, Professor of ocean physics at the University of Cambridge, who is the former director of Cambridge’s Scott Polar Research Institute and who is celebrated for submarine journeys under the polar ice.

Wadhams tells the Independent newspaper this morning that any serious spill in the Arctic ice is likely to be an uncontrollable environmental disaster.

“If there is serious oil spill under ice in the Arctic it will be very hard, if not impossible to stop it becoming an environmental catastrophe,” he says. “It will be very much harder to deal with than a major spill in open water.”

Oil can also get trapped by the ice and the moved around. “The oil is caught underneath the ice, so you can’t get at immediately to clean it up or burn it off. You don’t know exactly where it is, and then it gets encapsulated in the new ice which grows underneath, so you then have a kind of oil sandwich inside the pack ice.

He adds: “And that’s being transported around the Arctic and isn’t released until spring, when it may be several hundred or even a thousand miles from the source of the spill, so you can have a huge area of the Arctic becoming polluted by oil without initially it being clear where that oil is.”

Finally he says : “Once it is released in springtime, it’s very toxic, because the encapsulation in the ice preserves the oil from weathering, so that instead of the lighter fraction evaporating and the heavier fraction becoming just tar balls, you have fresh oil being released exactly where the ice is melting, usually round the edge of the pack ice where you’ve got a lot of migratory birds.”

Such is his concern that he is organising an international high-level academic seminar to discuss Oil Spills in Sea Ice later this month.