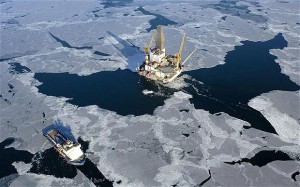 It will not just be Bob Dudley from BP who will be aghast at the news that Exxon and Rosneft have signed a historical deal to develop Arctic oil reserves, but many people from Alaska too.

Just months after BP failed in a bid to form a strategic alliance with Rosneft, ExxonMobil has outsmarted its old rival to build a strategic partnership with the Russians in a $3.2bn agreement.

The news will be met with disbelief by not only BP but many in Alaska where even decades later the scars of the Exxon Valdez spill are still to heal.

It may be BP who caused the largest spill in America’s history, but Exxon’s spill – and the subsequent clean up – inflicted far greater death and destruction on America’s people and wildlife.

Some 22 years after the spill, you can still find oil in Prince William Sound.  An unknown number of clean up workers have died from exposure to a cocktail of oil and clean-up chemicals.

But the Exxon Valdez and its lethal legacy obviously means nothing to the Russian oilmen and politicians, who are determined to explore and develop the Russian Arctic, seen as one of the few places in the world with large, untapped oil and gas reserves.

At the signing ceremony yesterday in the Black Sea resort of Sochi, Vladimir Putin, Russian prime minister, and T-Rex Tillerson, Exxon’s chairman and chief executive were there.

Putin said Exxon “has unique technology” for work in the Arctic, presumably not meaning the flawed technology that allowed the Exxon Valdez tanker to run aground in Alaska or the completely inadequate clean up technology that Exxon employed after the spill.

Despite the legacy of the Exxon Valdez, there is no doubt that the Arctic is rapidly becoming the oil industry’s final frontier.

Although the initial agreement is for $3.2 billion, Russian news agencies quoted Putin saying the potential investments by both companies could be as high as $500 billion.

“The scale of the investment is very large,” Putin said. “It’s scary to utter such huge figures.”

Analysts were quick to acclaim it as an excellent move for both Exxon and Rosneft, pointing up BP’s failure in sharp relief.

Robin West of PFC Energy, the consultancy, told the FT that the tie-up was “a marriage made in heaven”.

But if there is a major spill in these fragile Arctic waters it will be hell.