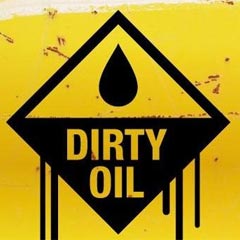 Over the last few months I have been working with Friends of the Earth Europe looking at the extensive lobbying by the Canadian government over the tar sands in Europe.

What we uncovered is that over the last two years we have seen a concerted lobbying campaign by the Canadian and Albertan governments to undermine one of the flagship EU policies on climate change, called the Fuel Quality Directive (FQD), whose aim is to reduce greenhouse gas emissions from transport fuels.

Our report documents the Canadian’s “dirty lobby diary” and exposes how there has been a huge number of lobbying events – over 110 – organised by the Canadians on tar sands and the FQD since September 2009 until July this year. This is over one per week. Many more will not be known about, so the real number will be much, much higher.

The main messages used by this team and at other Canadian lobbying events are the “key” role that Canada plays in energy security and that it is a “secure, reliable and abundant” source of energy. At the same time the climatic impact of tar sands have been deliberately downplayed. So the overriding message is that Canada is not exporting dirty oil, but clean energy. One of the dirtiest fuels on the planet is being sold as clean, stable and secure.

The unprecedented PR campaign has included the whole spectrum of lobbying methods: from “scientific studies”, carefully crafted messages, visits from Canadian and Albertan politicians to Europe, constant lobbying of MEPs and the European Commission and lobby tours for EU decision makers to the tar sands region in Alberta.

At the same time the Canadians have attacked their critics for being ill-informed and emotional, whilst saying they stick to the science and the facts. Once again these are classic PR techniques trying to marginalise NGOs and independent scientists, while trying to position Canada in the middle of the debate.

In reality, it is the Canadian government (in close collaboration with the oil industry) that is continuously undermining the science, and the EU’s independent scientific studies, even after they were peer-reviewed. At the same time, the Canadians are promoting studies from IHS Cera, a research institute that mainly works for the oil industry.

Darek Urbaniak, the extractives industries spokesperson for Friends of the Earth Europe, said last week that: “The Canadian government has undermined independent science, deliberately misled and done everything in its power to undermine and delay the Fuel Quality Directive. This is possibly the most vociferous public relations campaign by a foreign government ever witnessed in the EU and is reminiscent of the tobacco industry in its attempt to delay action on health.”

There are other obvious flaws and inconstancies in the Canadian lobbying efforts. In Europe, for example, the Canadians have promised to take measures to reduce CO2 from tar sands, in order to convince European decision makers. But back home they use completely different language, saying that they will not introduce greenhouse gas legislation that cuts investment.

Meanwhile, the Canadians “lobby tours,” where MEPs and key decision makers have been invited to Canada to see the tar sands for themselves, have been criticised for being highly biased and one-sided.

This “dirty” lobbying is likely to intensify after the summer break. Urbaniak argues that “European decision makers must take into account the real carbon footprint of tar sands and not to give in to Canadian pressure”.