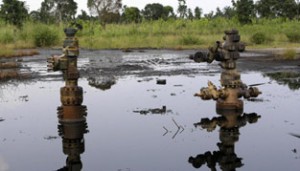 Often in the 24 hour news world, stories are reported at such a rate that no one ever takes a step back to see if they are joined up.

No one ever seems to ask searching questions to see if two different stories are connected and therefore what are the consequences of that connection.

You might have various stories of extreme weather events on the one hand and then a story of record rises in carbon emissions on the other and often people fail to ask are the two connected.

Even two stories on the same company in the same week don’t get joined up. Take Shell.

Late last week the long-awaited report by UNEP into oil pollution in Ogoni in the Niger Delta got released.

The report, which received widespread publiclity, makes devastating reading and confirms what the communities have been saying for decades: that chronic pollution is widespread and Shell has left a disastrous toxic legacy in the Delta. “Pollution of soil is extensive, widespread and severely impacting,” says the report.

“The environmental restoration of Ogoniland could prove to be the world’s most wide-ranging and long term oil clean-up exercise ever undertaken if contaminated drinking water, land, creeks and important ecosystems such as mangroves are to be brought back to full, productive health.”

The report confirms heavy contamination of land and underground water, sometimes more than 40 years after oil was spilled. The pollution has permeated deep underground with sources of drinking water containing dangerous concentrations of benzene and other pollutants.

Such is the pollution that in one community at Nisisioken Ogale, in western Ogoniland, families are drinking water from wells that is contaminated with benzene- a known carcinogen-at levels over 900 times above World Health Organization guidelines.

Cleaning up the pollution and catalysing a sustainable recovery of Ogoniland could take 25 to 30 years and cost up to one billion to clean up.

“The oil industry has been a key sector of the Nigerian economy for over 50 years but many Nigerians have paid a high price. It is UNEP’s hope the findings can break the decades of deadlock in the region. [The study] offers a blueprint for how the oil industry and public authorities might operate more responsibly in Africa and beyond at a time of increasing production and exploration across many parts of the continent.”

I know much of the pollution in the Delta is decades old and the industry and Shell, in particular, will argue that in the intervening decades since it started drilling in the Delta the standards have improved beyond recognition.

But here is the fundamental question that links into the other story about Shell from last week. How can you trust a company with such an appalling environmental record such as in the Niger Delta to operate in another fragile environment – this time in the Arctic?

Surely any legislator who read the UNEP report would not want Shell drilling anywhere near anything sensitive. But last week the US Government conditionally approved Shell’s revised plans to drill up to four wells in the highly sensitive and fragile Beaufort Sea beginning in July 2012.

Shell acquired the leases as early as 2005 and has poured billions of dollars into the project but has been stifled by appeals and lawsuits.  Shell now says it has the industry’s “most robust” oil spill response plan in place.

Although final approval for a permit is contingent upon Shell securing drilling, air quality and other necessary permits and authorizations, this represents a major victory for Shell to start drilling in the Beaufort Sea.

Michael Bromwich, the Director of the Department of Interior’s Bureau of Ocean Energy Management, Regulation and Enforcement, said the agency bases it decisions surrounding energy exploration and development in the Arctic on the best scientific information available.

“We will closely review and monitor Shell’s proposed activities to ensure that any activities that take place under this plan will be conducted in a safe and environmentally responsible manner,” he said.

Maybe Bromwich should read start by reading the UNEP report and start to join up the dots. He should then ask a final question. If a company can devastate the Niger Delta why should we allow it to drill in the Arctic at all?