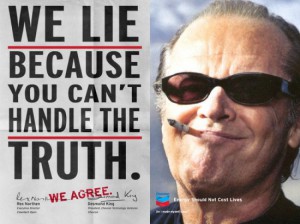 Ever get tired of those cheezy ads from oil companies or really fired up over ‘independent’ research that asserts that everything you thought was great about alternative enery sources turns out to be a myth?

Well Erik Curren over at Transition Voice sums it up nicely on this cross-post. Thanks Erik…

Every time I’m tempted to stop worrying and love oil companies, they do something to set me straight again.

A few weeks ago, when I watched the documentary Houston We Have a Problem, I wanted to hug the Texas oil guys who said that the world was running out of oil and that the economy needed to find another source of energy. Or even start to conserve.

Then, there was a heartwarming online video from Transition Houston, featuring a geophysicist, formerly in exploration with major oil companies, talking about the need to bring communities together as “a response to peak oil and climate change.”

On one level, it totally makes sense that people who work with oil, who know oil, who love the smell and taste of oil are the best ones to advise the rest of us mere retail addicts on how best to solve today’s oil problems. Oil men know we’re running out of oil. They know how powerful oil is and how hard it will be for us to do without. And maybe they want the drivers, food-eaters and globalized consumers of the world to pull our heads out of the sand and face peak oil.

So, even after dozens of rants against Big Oil, I’m feeling weirdly good about the people who provide us with all that beauteous black gold. They’re confident. They’re street smart. And that Texas twang might just mean that they’re straight shooters.

And then, pow, right in the kisser!

And what do I get but an insultingly pandering political issue campaign called Stop the Energy Freeze, aimed at pressuring the Obama Administration to lift its post-Gulf Spill moratorium on deepwater drilling: “Washington must stop the freeze on America’s energy supplies before high prices freeze tens of millions of Americans out of a better life.”

Not surprisingly, the site is unhelpful at explaining who’s really behind this effort, crediting it to an outfit called the Institute for Energy Research (IER), introduced blandly as “a not-for-profit organization that conducts intensive research and analysis on the functions, operations, and government regulation of global energy markets.”

That could describe any one of a dozen dirty-energy lobbying outfits in Washington.

And guess what? When you connect the dots, this place turns out to be…get ready for it…a dirty-energy lobbying outfit in Washington.

The IER is a classic oil-industry front group with funding from ExxonMobil, the Koch brothers and other oily nasties set up to deny climate science and claim that the world has a nearly limitless supply of fossil fuels remaining. So no surprise that they’re trying to get deep offshore drilling started again. You can’t just let those platforms sit around at a million bucks a day. Too much of that looks terrible on the quarterly report.

But what really flares off my natural gas (did that come out right?) is that it’s not enough for these people to try to sell their own crack. They also have to break the windows at the rehab center too.

Drilling for dirt on solar and wind

So IER does more than pimp for drilling. They also pick on clean energy. “Danish journalists have confirmed that The Institute for Energy Research commissioned and paid for the anti-wind energy study released last year by a Danish think tank that claimed Denmark exaggerates the amount of wind energy it produces (it doesn’t), questioned whether wind energy reduces carbon emissions (it does), and asserted that the U.S. should choose coal over wind because it’s cheaper (it’s not when you count the true costs of coal),” writes Brendan DeMille at the DeSmog Blog.

Clever. But when they want to rag on solar power, IER is apparently the kind of ballsy front-group that doesn’t need to hide behind another front-group to do it. Boldly they proclaim, on their own blog, that “Solar is all Sizzle and Lots of Pork,” retailing the kind of grousing about how puny solar is that we’re heard from oil and coal companies for the last thirty years: “The problem is that solar energy is unreliable, expensive, and heavily subsidized by American taxpayers.”

I asked Ken Zweibel of the GW Solar Institute at George Washington University for his take and here’s what he said:

Although solar is too expensive now, it has been coming down approximately 20% in price every doubling of installations. This means it is on a steady path to becoming cost-effective. In addition, solar displaces fossil fuels, helping to clean the environment. This aspect of solar is rewarded with societal subsidies. The subsidies are payment for reducing carbon dioxide, reducing other air and water emissions, being a safer way to make energy, and adding to our energy self-sufficiency.

Lots of other research shows that solar is perhaps the fastest growing major source of energy today and that it’s following the same adoption curve seen in the past when nuclear power and natural gas became major sources of electricity.

By now, I’m so over oilmen and their bullsh*t expertise on energy. Sure, I still appreciate it when industry insiders at ASPO-USA warn us that renewables won’t take up all the slack from oil and coal. But I don’t really need oilmen to set me straight about net energy. I can get that from Colin Campbell or Richard Heinberg, guys that I trust because I know that they’re not razzing on solar and wind to try to sell me on tar sands, shale gas and drilling in the Arctic.

Meantime, I’m glad to see that oil companies are spending money to take down renewables because it cancels out the money they spend with their other hand on greenwashing ads about how they support renewables. In Houston, just like in Washington, they really know how to play it both ways.