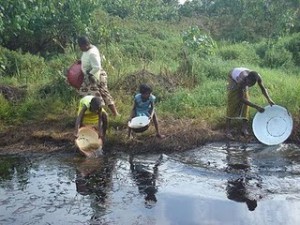 The history of Shell in Nigeria is one of contempt for the locals, of systematic and chronic pollution and of a vortex of violence in which thousands have been killed, or tortured.

The country remains a grubby stain on Shell’s iconic logo. The company has never apologised for its role in the death of Ken Saro-Wiwa, or countless others who have been murdered, raped or abused.

Shell has more often than not tried to blame others for the pollution and very, very rarely even accepted liability for its actions, especially when it comes to violence by the Nigerian authorities working in collusion with Shell or with oil spills associated with its operations.

There have been exceptions to the rule: Just over two years ago, in June 2009, Shell settled the legal case brought by the Wiwa family and others for $15.5 million for amongst others complicity in Saro-Wiwa’s murder, torture, abduction, summary execution, and crimes against humanity.  But in settling the case, Shell refused to accept liability.

So it is good to see that, according to John Vidal, writing in today’s Guardian, Shell accepts “full” liability for two oil spills near Bodo in Ogoniland that “devastated a Nigerian community of 69,000 people and may take at least 20 years to clean up.”

Last week Shell Nigeria said: “SPDC accepts responsibility under the Oil Pipelines Act for the two oil spills both of which were due to equipment failure. SPDC acknowledges that it is liable to pay compensation -to those who are entitled to receive such compensation.”

The oil spills devastated a 20 square kilometre network of creeks and inlets on which Bodo and as many as 30 other smaller settlements depend for food, water and fuel.

The oil giant now faces a bill for hundreds of millions of dollars following a class action suit brought on behalf of the local communities – some estimates say it could be as much as $100 million to clean up the mess.

Some experts are arguing the Bodo spills could actually be as large as the 1989 Exxon Valdez disaster in Alaska when at least 11 million gallons of oil was spilt.

Shell, of course, disputes this and is trying to argue that only 40,000 gallons were spilt.

Nenibarini Zabby, head of conservation at the Centre for Environment, Human Rights and Development in Port Harcourt told Vidal:

“This was an exceptionally sensitive ecosystem. The spill lasted a very long time and it spread with the tides. Ten years ago you would have seen rich, lush vegetation here. Now it is all dead. The mangroves have been killed. The oil has got deep into the sediments. Without a complete clean up to international standards this community has a hopeless future.”

Chief James, the assistant secretary to the Bodo council of chiefs and elders added: “Nowhere and no one has escaped. Every family has been affected. This has caused serious poverty to everyone.  Nearly 80% of people here are fishermen or they depend on the water. They have lost their livelihoods.”

The case against Shell was brought in a class action lawsuit in April this year in London by pioneering lawyers Leigh Day and the successful outcome could open the legal floodgates for other impoverished communities, many who have been denied justice. On average there are three oil spills a day in the Delta.

“The news that Shell has accepted liability in Britain will be greeted with joy in the delta. The British courts may now be inundated with legitimate complaints,” Patrick Naagbartonm, coordinator for the Centre of Environment and Human Rights in Port Harcourt told Vidal.

The news comes on the eve of the publication of a controversial report into the pollution in the Delta. A UN Environment Programme (UNEP) report, which has been funded by the oil giant, will be presented to Nigeria’s president Goodluck Jonathan tomorrow.

The peer reviewed report is expected to say that oil pollution in Ogoni is much worse than previously thought.

This is despite the fact that many in the Delta remain sceptical about the report due to Shell’s financial involvement.

So expect the debate to rage for a while yet…