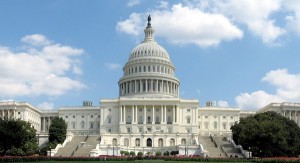 OK there is only one story in town this week in Washington. With just hours to go the House of Representatives has just passed a last minute bill to raise the US borrowing limit, preventing the markets free-falling. The Senate is now expected to follow suit.

The immediate reaction from the Democrats is anger that so much ground has been given by Obama to the Tea Party tail that is wagging the Republican dog.

One Representative Emanuel Cleaver, a Missouri Democrat, said: “This deal is a sugar-coated Satan sandwich. If you lift the bun, you will not like what you see.”

Although much of the details are still to be worked out, E&E is arguing that the 10-year domestic spending cap will dramatically reshape the fiscal future of America’s energy and environmental agencies.

The EPA, DOE, and Department of Interior are all likely to have their budgets slashed. This is not good news as it will mean that with restricted funds, the EPA will find it harder to counter the Republican assault on its operations.

The political maelstrom over the budget has also hidden another interesting – and related story.

So far the House has taken 110 anti-environment votes this year in Congress.  It has already voted to block action to address climate change, to stop actions to prevent air and water pollution, to undermine protections for public lands and coastal areas, and to weaken the protection of the environment in dozens of other ways.

Other anti-environment votes include 28 votes to block actions to prevent air and water pollution.  These include votes to relax emission requirements for offshore oil and gas activities; to stop EPA from establishing new water quality standards or enforcing existing ones; and to prevent EPA from protecting streams from the effects of mountaintop-removal mining.

Finally the anti-environment votes include 22 votes to defund or repeal clean energy initiatives.  These include votes to overturn new, industry-supported energy efficiency standards for light bulbs; to cut funding for renewable energy projects; and to defund research into promising clean energy technologies.

“This is the most anti-environment House of Representatives in history,” argued Waxman, the ranking Democratic Member of the House Energy and Commerce Committee.  “The new Republican majority seems intent on restoring the robber-baron era where there were no controls on pollution from power plants, oil refineries, and factories.”

Rep. Markey, Ranking Democratic Member of the House Natural Resources Committee did not mix his words either. “President Theodore Roosevelt said, ‘A vote is like a rifle’ and House Republicans have one pointed right at the heart of America’s clean energy future. Time after time, Republicans have voted to leave our air and water more polluted, keep our nation more dependent on foreign oil, despoil our National Parks, and deny that our climate has a rising fever.”

The House is currently debating H.R. 2584, the FY 2012 Interior and Environment Appropriations bill, which some have called “the worst assault on clean air and water in history.”

This legislation contains 39 new anti-environment riders and slashes funding for the EPA and the Department of Interior.

And that is before the Republicans – with their Tea Party supporters – start feasting on “Satan’s sandwich”.