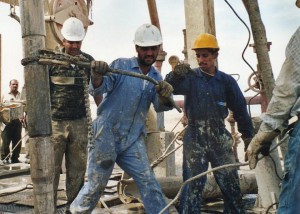 The oil industry watchdog PLATFORM has issued a report which exposes the extent to which the British oil giant BP has gained control over one of Iraq’s most lucrative oil fields, the super-giant Rumaila, near the Southern city of Basra.

The report, “From Glass Box to Smoke Filled Room – How BP secretly renegotiated its Iraqi oil contract, and how Iraqis will pay the price”, reveals that BP’s control is now so great that the 20-year contract for the Rumaila field actually commits future Iraqi governments to paying BP whether it extracts oil or not.

It was back in 2009 that the contracts were signed. Just how bizarre the whole situation was is revealed by the fact that in April 2009, just two months before the auction at which BP won the contract, Iraqi Ministry of Oil officials sought training on commercial and negotiating skills from, you guessed it: BP.

Then in June 2009 BP was awarded the Rumaila field at an auction. The contracts were service contracts rather than the companies’ preferred production sharing agreements, which had been proposed for Iraq but rejected as giving too much away to the oil majors.

Media reports of the auction focused on the headline remuneration fees, which many commentators thought were so low– between $1.15 and $5.50 per barrel – that the profitability of the deals was called into question.

But as always in oil contracts, the devil is in the hidden detail and the Iraqi government had tried to allay fears by arguing that the whole contracting process was transparent. The then Oil Minister Husain al-Shahristani said: “I pride myself that the deals in the first bid round and the second bid round have been more transparent than any other deals I am aware of in any of the other OPEC member countries. As a matter of fact, we have set the standard for transparency.”

However, suspicions were raised when BP did not sign the contract until four months later.

Although the Iraqi government said nothing had changed in the interim, only “clarifications” – these claims are shown not be true by the publication of the final contract.  PLATFORM’s report reveals that several key changes were made, including:

* BP could opt to be paid for oil not produced as a result of OPEC quotas or Iraqi infrastructure bottlenecks. In the model contract for which companies bid at the auction, the cost of such scenarios would have been shared by both BP and the Iraqis;

* The threshold for BP’s project expenditure at which Iraqi approval was required was raised from $50m to $100m and tight time limits applied to Iraqis’ ability to check such expenditures are legitimate and not inflated.

The issue of the contracts remains sensitive. When Iraqi parliamentarians called the Oil Minister in for questioning about the contract, the Iraqi Prime Minister Nouri al-Maliki asked the Speaker of the Parliament to block it.

Greg Muttitt, author of the report and the recently published book “Fuel on the Fire – Oil and Politics in Occupied Iraq” argues that the “changes that took place behind closed doors at first look like technical details. But look more closely and you see their real meaning: BP, not the Iraqi government, will effectively control future rates of production. This gives the company a stranglehold on the Iraqi economy.”

Kevin Smith, a campaigner from oil industry watchdog PLATFORM added: “ Whatever pressure BP has brought to bear in these backroom dealings, the changes are clearly to the detriment of the people of Iraq.”