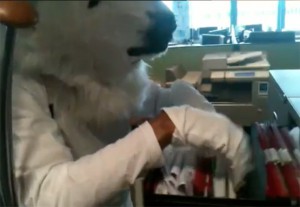 One of the many ways in which powerful polluters try to silence their critics is through legal intimidation.

And Cairn Energy, which is involved in controversial drilling in the Arctic, is no exception.

For months Cairn has been dogged by Greenpeace, which has been campaigning against its Artic operations off Greenland.

On Monday about 60 Greenpeace campaigners barricaded themselves in at Cairn Energy’s offices in Edinburgh.

Many of the activists were dressed as polar bears. The Greenpeace occupation came a few weeks after Cairn announced it had begun drilling at two wells off the coast of Greenland.

One of the reasons for Monday’s protest was to try and force Cairn to release its oil spill response plans, just in case it suffered a catastrophic repeat of a Deepwater Horizon spill.

During the occupation, Greenpeace UK campaigner Paul Morrozzo told the BBC it was “time for Cairn Energy to end their cover-up”.

Morrozzo added: “This cowboy oil company has consistently refused to release their Arctic oil spill response plans because they know any oil spill in the fragile and pristine environment of the High North would be impossible to clear up.”

The interdict also demands that Greenpeace remove Tweets and Facebook updates of protesters dressed as polar bears, and that photographs issued to national newspapers be retracted.

The court order prohibited Greenpeace “disseminating, printing, uploading, sharing, copying or otherwise publishing any images, photographs, pictures or other material (or copies thereof) taken or recorded by Greenpeace activists present within 50 Lothian Road, Edinburgh on or around 18 July 2011.”

Greenpeace argues that Cairn is clearly worried that Greenpeace got hold of its secret Arctic oil spill response plan and is panicking.

It argues the injunction is a “legal hammer.”

The head of Greenpeace UK, John Sauven, accused the firm of attempting to cover up the operations “by any means they can”.

“Cairn Energy is using its legal muscle to try and gag us from telling the truth about their dangerous oil drilling in the fragile Arctic environment,” argues Sauven.