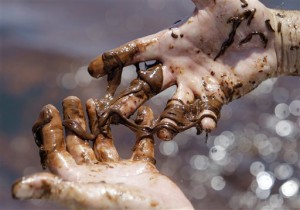 Just as BP slowly begins to rebuild its tarnished reputation, it has slipped up again. Not in a catastrophic company-threatening way  like it did last year but a much smaller spill, this time in Alaska.

Although the amount spilt – some 2,100 to 4,200 gallons of fluid –  is infinitesimal compared to the Deepwater Horizon, BP’s problem is that it happened at all.

Also it occurred in Alaska where there have already been numerous spills by ther company.

In fact spills by BP in Alaska  are becoming common place.

The new spill happened at BP’s 30,000 barrel per day Lisburne field, which is currently closed for maintenance. It ruptured during testing and the pipeline will now have to be dug up to investigate why it failed.

BP said the clean-up was under way and the company would determine the cause “in due course”.

We have to remember that this is not the first time BP has spilt oil in Alaska. There was another spill on a pipeline operated by BP in Alaska earlier this year.

That incident followed previous spills in 2006, when BP agreed to pay a $20m fine over a series of leaks on Alaskan pipelines where corrosion was blamed for the spillages.

The Alaska incident follows Exxon Mobil’s spill into the Yellowstone River in Montana earlier this month.

And guess what. Yesterday another new oil spill was reported in northwestern Montana. The new spill – involving hundreds of gallons of crude – was discovered in Montana 350 miles from where cleanup crews are mopping up Exxon’s mess on the Yellowstone River.

Once again the amount of oil spilled was small, but it is the regularity of oil spills that will be concerning many people at the moment.

The other thing that will alarm people is that the oil spill was not made public, because it occurred on the land of the Blackfeet Indian Tribe.

But the company involved, FX Drilling never bothered to report the spill to either the tribe or to the Environmental Protection Agency.

Despite spills coming thick and fast at the moment, the industry is still pushing to build Keystone XL.

Oh and also expand drilling in the Arctic…