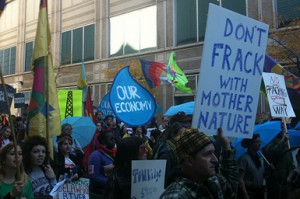 The world’s largest mining company, BHP Billiton has signalled it too wants to get in on the shale gas revolution sweeping the US, despite the growing controversy over fracking.

And let’s not forget that this is BHP’s second shale gas investment this year. If you add PetroHawk to BHP’s other recent investment  – the $4.7bn acquisition of Chesapeake Energy assets in Arkansas – we could be looking at the company investing nearly $80 billion in shale gas.

The deal is significant as it moves BHP more towards oil and gas than mining.  Indeed BHP’s CEO, Marius Kloppers, said last week: “We are very comfortable with petroleum being a bigger weight of the company – more than a third.”

Despite the fact that the controversy over the environmental and safety impacts of fracking is raging right now across the US, BHP intends to develop Petrohawk’s one million-acre shale gas production base, with an estimated 35 trillion cubic feet of gas.

One analyst went as far as to tell the Financial Times that BHP’s fracking plans are “eye-watering”.

What is interesting about this is that BHP is ploughing billions into the technology despite the risks and growing controversy.

The US Environmental Protection Agency is currently investigating the highly controversial fracking and it has been banned outright in some states.

Mining companies have never really won awards for being honest about the environmental impact of their operations, so it comes as no surprise that BHP says the technology is “safe when coupled with sound operating practices”.

And if safe means people can light set light to their water coming down the taps, I would hate to see what BHP mean by dangerous.

The other slight flaw in BHP’s plans is the depressed gas price due to over-production of gas.  US natural gas prices are about half the level that most analysts believe is necessary to justify the upfront costs and capital expenditure.

No wonder the group’s shares fell 2 per cent to 2,340p, as the market registered caution about how much BHP has paid.

And if the EPA comes out with a strongly worded report on the issue, it could turn out to be a toxic investment.