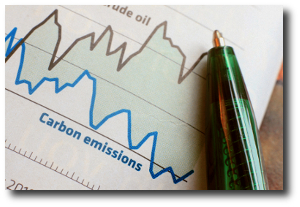 For many years now, a number of activists and analysts have argued that if we are serious about tackling climate change then the reserves of oil and gas in the ground need to be seen as liabilities and not assets.

At the moment an oil company is judged by investors by the strength and size of its reserves. Oil, gas and coal companies are still seeking reserves of fossil fuels, despite the fact that we  know we have to burn far less of the stuff.

In a rational world, that would not make sense, but who said anything about the financial markets being rational.

For example in a carbon-constrained world what worth are large reserves of carbon? Surely they go from an asset to a liability?

A great report published earlier this week by the Carbon Tracker Initiative, reveals the scale of the crazy imbalance.

However, from this total we have to take off the emissions that we have already emitted, leaving a total budget of 565 GtCO2 for the remaining 40 years to 2050.

The known fossil fuel reserves declared by energy and mining companies is equivalent to 2,795 gigatonnes of CO2.

Which means – and here comes the staggering truth – if the world wants to keep climate change to below 2 degrees, 80% of those reserves can never be burned. They are useless assets.

As the report states: “this means that governments and global markets are currently treating as assets, reserves equivalent to nearly 5 times the carbon budget for the next 40 years. The investment consequences of using only 20% of these reserves have not yet been assessed.”

One way to assess this is that these reserves are toxic debt, and just like in the financial crisis, they are assets that have to be got rid of.

If that happens many of the world’s leading companies would be effectively bankrupt.  For example, the top 100 coal and top 100 oil & gas companies have a combined value of $7.42 trillion. But this worth is built on the bedrock of their reserves.

The strength of financial centres like London are based on fossil fuels. Companies listed in London currently have 105.5 GtCO2 of fossil fuel reserves on its exchange which is ten times the UK’s carbon budget for 2011 to 2050, of around 10 GtCO2.

Just one of the largest companies listed in London, such as Shell or BP has enough reserves to use up the UK’s carbon budget to 2050.

The reports argues that “with approximately one third of the total value of the FTSE 100 being represented by resource and mining companies, London’s role as a global financial centre is at stake if these assets become unburnable en route to a low carbon economy.”

Recently London has seen the huge listing of Glencore on its exchange “with no consideration by the regulators of potential systemic risks to financial markets of the increased exposure to climate change risk.”

Investors carry on investing in oil, gas and coal as if the carbon emissions locked in these investments have no downside.

The report argues that “We believe investors need to respond to this systemic risk to their portfolios and the threat it poses of a carbon bubble bursting.”

Because if the carbon bubble bursts, then the recent financial crisis will look like a tea-party.