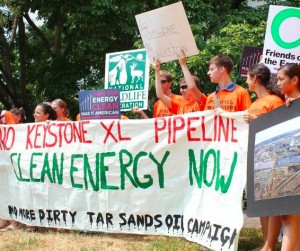 Last week, came the news that an Exxon pipeline had ruptured into the beautiful Yellowstone river.

This was quickly followed by the revelations that the controversial Keystone XL pipeline would pass under the same stretch of river, raising doubts over its safety and capacity to clean up any spill.

Now this has been followed by the damaging revelations that TransCanada has not fully assessed the possible spill impacts from Keystone XL.

A new study undertaken by Dr. John Stansbury of the University of Nebraska, Lincoln, who is a water resources engineer was released by Friends of the Earth yesterday.

Stansbury argues that TransCanada has presented American regulators with an “an unrealistically optimistic” portrayal of the consequences of a spill from Keystone XL.

“A thorough, adequate assessment of the potential impacts of leaks from the pipeline has not been done,” Stansbury said. “It should be done before we make any decisions on this pipeline one way or the other,” he said.

In contrast, Stansbury argued that pipeline would experience 91 spills producing leaks of more than 50 barrels of oil during the same time period.

Stansbury also argued that it would take 10 times longer to shut down the pipeline when a leak developed than TransCanada estimated and that a worst-case spill would release about six times more oil than the company anticipated.

“You would not have to expect the worst-case spill, but you would have to plan for it.”

Stansbury’s report argues that TransCanada has “made several assumptions that are highly questionable” in the calculation of these frequencies of oil spill.

According to Stansbury, TransCanada has ignored historical data and had “assumed that its pipeline would be constructed so well that it would have only half as many spills as the other pipelines in service”.

TransCanada  had also underestimated the impact of higher pressures and temperatures as well as the fact that the crude will be more corrosive.

Of course, TransCanada rejected the report’s conclusions that it was playing down the potential severity of spills. “We use risk-based assessments that are industry-leading methods to quantity failure frequency,” the company said.