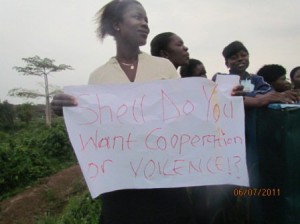 For hundreds of communities across the Niger Delta the daily unseen struggle against Shell continues.

At the end of last week four Ijaw communities gave the oil giant a 14 day ultimatum, demanding that Shell finally implement an agreement that they reached in 1999, twelve years ago.

Fearing the company will not honour the agreement, four local communities, including many women, staged a peaceful protest to the heavily guarded Shell facility, at Kolo Creek.

Environmental Rights Action has been documenting Shell atrocities in the Delta for decades and one of their field monitors was at the protest to bear witness.  The protestors managed to break through a military checkpoint to reach the Shell facility.

“Shell has cheated us for too long”, Amakiri Joseph, Vice-Chairman of the Community Development Committee of Oruma said, one of the protestors, who weas worried that the Nigerian military might retaliate against the protestors. “The Kolo Creek communities have been known to be very peaceful but if the soldiers and Shell take undue advantage of our peaceful disposition today to intimidate us, we shall not take it.”

Joseph continued: “All we are demanding for is that Shell should respect the agreement it reached long ago with our people; these four communities. They agreed to extend electricity to our communities but they are not doing so; while benefiting heavily from our oil wells. This is not a fresh demand, it is an agreement reached with us that we are trying to enforce.”

Mrs. Beauty James, a community leader from Oruma community said: We are not coming to make new demands from Shell, but that they fulfil the agreement they reached with us.”

Pastor Ranami Afagha, Vice-Chairman of Imiringi community adds: “We are not joking, Shell should honour the 1999 agreement or else the company is free to leave our environment for us. They should give us light, water, roads and also ensure that their operation within this environment is safe for us and every other living thing in the ecosystem.”

Even retired military joined in the process. Loveday Ada, retired soldier from Otuasega said “If Shell is treating us well do you think our people will waste their energy on this kind of thing? There would have been no need, I tell you. The company should change its old tactics of dealing with host communities.”

Finally Nothingbad Ada, from Otuasega community says “Shell is wicked. They refused to implement agreements that they entered into with our community leaders some years ago. Have we not been patient enough?”

Environmental Rights Action is now calling on Shell to “respect and implement the agreements in question.”

Ben Amunwa from the oil industry watchdog Platform adds: “I met with community members when I visited Kolo Creek in late 2010 with ERA and SDN. Then I was told that poverty, neglect and  military repression had turned the local community into “a slave to Shell”.