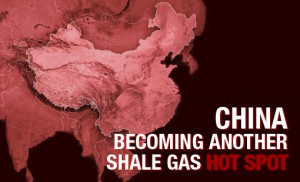 What a difference a day makes.

The article quoted a recent report from the investment bank, Jefferies which said:

The article concluded that “unconventional gas in China is at least a decade away.”

Time flies quicker than you think. One day later and the FT ran another article on the shale gas scene in China. And rather than waiting ten years to exploit shale gas, the Chinese are going to exploit it now.

The paper argued: “China’s search for natural gas passed a milestone this week as Beijing launched its first tender offer for four shale gas blocks in southern China to underline its determination to move forward with developing unconventional gas resources.”

The tender offer will only be open to Chinese domestic oil and gas companies – something that will really irk the oil majors such as Shell and BP.

So if anyone is worried about the expansion of fracking, China could be the new frontier. The US Energy Information Agency estimates that China has larger shale gas reserves than the US, where the shale gas revolution continues unabated.

But the market for gas in China is huge. Gas use is set to more than double over the next five years to reach 260bn cu m, making China the world’s third-largest gas market after Russia and the US.

”Shale gas is a game-changer for the US and should do the same for China,” argues Ming Sung, the Asia representative of the Clean Air Task Force in Boston.

”This should be one of the centrepieces for China’s energy strategy. As with any new technology, we must balance benefits versus potential environmental impacts. The experiences of the US are valuable here.”

Others though are not so sure. “Shale gas in China is really different from the US – it is not as promising,” argues Steve Zou, chief executive of Asian American Gas, an energy company that has coal-bed methane concessions in Shanxi province in the north of the country.

“One complication for coal-bed methane is conflict with the coal miners”.

Another one will be conflict with consumers over drinking water.